NIGHT PASSAGE—–okay 1957 Jimmy Stewart western is great to look at, and casually entertaining, thanks to the estimable cast and beautiful locations, but it ranks behind the star’s other outdoor roundups from the decade. The previous five all bore the directorial stamp of Anthony Mann, but he and the Stewart had a falling out over this—script, tone and casting disagreements it seems—and the reins were handed to TV yeoman James Neilsen, his first feature.  Consensus seems to be that Stewart swayed the film his way and Neilsen acquiesced: his later big-screen work was similarly competent but lackluster. * 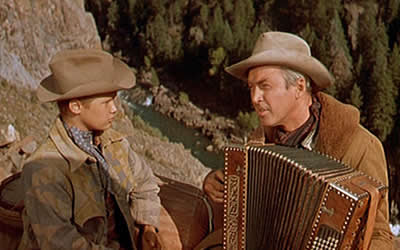 Trains and payrolls in the Rockies are being held up and an undercover railroad detective (Stewart) ambles into town to sift the culprits. One turns out to be his younger brother, ‘the Utica Kid’ (Audie Murphy), lethal but genial, working with the sneering ‘Whitey Harbin’ (Dan Duryea).  Other varmints include busy heavies Robert J. Wilke and Jack Elam. **

Stewart plays the accordion (he really could, yet it was dubbed here) for extra folksiness, and the Murphy-Duryea tag-team provides most of the energy to a predictable script. Duryea takes it rather over-the-top, giving the edge to the calmer Murphy.

Dimitri Tiomkin adds what he can with his score, and there is a pretty good climactic gunfight (gee, you’d hope so), but the strongest suit is the scenery, filmed around Durango and Silverton in Colorado and in California’s Inyo Natl. Forest.  William H. Daniels was cinematographer. Pretty enough you can feel the autumn mountain air.

* Stewart’s other offering for ’57, The Spirit Of St. Louis, taxied in right behind this, at spot #31, but its excessive cost marked it as a major flop. After the dust-up over this mediocre project, the glove-fitted and profitable working relationship of Stewart-Mann ended, and their friendship suffered. Mann opted for grimmer westerns starring Stewart’s friends Henry Fonda (The Tin Star) and Gary Cooper (Man Of The West).  Jimmy recovered with three horse-free hits in a row: Vertigo, Bell Book and Candle and Anatomy Of A Murder. 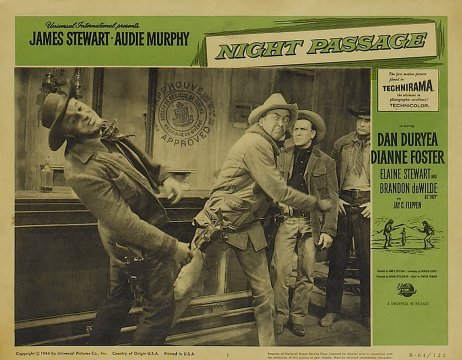 ** Favorite baddie Elam’s observations: “It was a payday, but I could have done without it.”  Audie was a true hero, I have to tell you. He loved to gamble, and I loved to gamble, and still do, and he was a real fanatic for poker, the horses, or dice, so that’s what we did on the set. When we were on location, we had a poker game every goddamn night. But he was underrated as an actor and a very interesting guy. And he had a dynamite temper if you did him some wrong. I saw him flare up three or four times when he thought there was an injustice around him, and, believe me, he was like a coiled rattlesnake when he flared up, but never unreasonably. It was always in line such as if he didn’t like some smart-ass on the set who was getting smart with a gal or something like that.”