WYATT EARP was a huge flop in 1994, losing many millions of dollars and drawing barely lukewarm critical applause (just an ‘okay’ corral). It’s easy to see why it limped at 55th place that year: the story is too familiar, the hero is unlikable, its pace drags rather than strides over a daunting 191 minutes, and Tombstone beat it to the draw by six months. The harsh critical pistol-whipping is less well deserved.

“Mister, I’ve been in a really bad mood for the last few years, so I’d appreciate it if you’d just leave me alone.”

Clearly a labor of love for director Lawrence Kasdan and producer-star Kevin Costner, the movie has a lot to offer the patient western fan. The production design is top rate: the costuming, sets, sound and the Oscar-nominated cinematography are all high quality. There is a marvelous performance by Dennis Quaid in the apparently can’t-lose role of Doc Holliday. “What is wrong with me? What have you got? I am dying of tuberculosis. I sleep with the nastiest whore in Kansas. Everyone who knows me hates me, and every morning I wake up surprised that I have to spend another day in this piss-hole world“.  *

On the other side of the faro table, the Earp brothers are a bland lot, even the normally interesting Michael Madsen. Ditto the bad guys, who make little impression, key for a western. The erstwhile compelling Jeff Fahey is allowed nothing as Ike Clanton.  Kasdan comes a cropper in this area; odd considering his superb lineup of varmints in Silverado. Plenty’a shootin’, but the crucial OK Corral event is a curious fizzle. 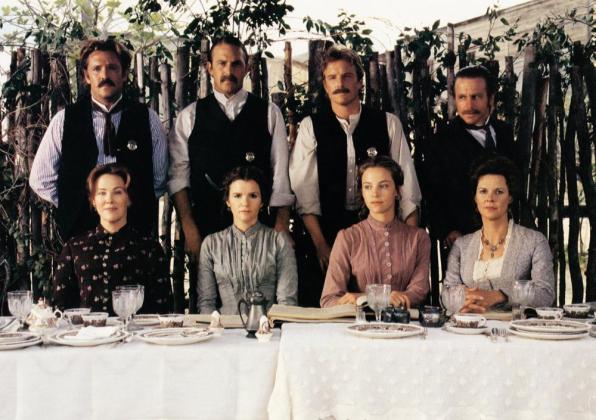 Mare Winningham and Joanna Going as Wyatt’s love interests are notably good, but Gene Hackman is rather perfunctory as Pa.  Kevin Costner is all right in the lead, but playing Earp with more historical truth than in previous tellings he can’t score many audience points as such a harsh, self-righteous fellow.

In all, the movie is a worthwhile addition to the film canon about the frontier’s most celebrated lawman, but those not inclined to be fond of the genre won’t want to saddle up.

* Doc keeps ’em on red alert: Victor Mature in My Darling Clementine, Kirk Douglas in Gunfight At The O.K. Corral, Jason Robards in Hour Of The Gun and Val “Huckleberry” Kilmer in Tombstone were all dandy, but I think Quaid edges them (even Val) just a hair. He’s deranged enough to be scary, lonely enough to be pitied, funny enough to lure you to the table. Just don’t fiddle with card tricks and watch what you say about Wyatt—and whatever else might flit across Doc’s honor screen. “My mama always told me never put off till tomorrow people you can kill today.”

One thought on “Wyatt Earp”