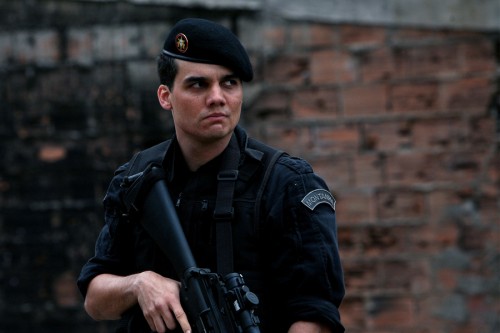 ELITE SQUAD—” I do things that scare even Satan himself.”  Brazen, blistering Brazilian crime drama from 2007 roiled critics, divided between those impressed by its sheer headlong energy and those turned off by its brutal violence and (mis)perceived endorsement of same. A huge hit in Brazil (where 2.5 million people saw it in theaters and, dovetailing perfectly with a story of corruption, an estimated 11 million viewed it on bootleg copies) it drew praise and was followed by a sequel in 2010, the superior Elite Squad: The Enemy Within.*

Directed by Jose Padilha, it’s set in Rio De Janiero in 1997. Hopelessly corrupt from top to bottom, absurdly murderous, its 700 favelas as casually, viciously lethal as war zones, the city is to be visited by the Pope (John Paul II). He wants to stay next to one of the drug-ruled shantytowns (peeking in on the faithful to report back to his boss).  The paramilitary BOPE (Special Police Operations Battalion), ruthless scourge of both drug dealers and corrupt cops (which means nearly every policeman in the city) has to secure the area. Their exhausted captain (Wagner Moura) seeks to train a replacement so he can attend to his ignored family life. Honest rookie applicants ‘Matias’ (André Rimero) and ‘Neto’ (Caio Junqueira) must first survive the beyond-severe training, then what amounts to constant jungle warfare. It ain’t pretty.

From minute one to 120 the pace rarely slackens below racing, and with the hand-held camerawork, lightning editing and subtitles you have to be bullet-quick to follow, it’s hardly a relaxing ride. Mercy?  Wrong place, wrong job, wrong movie. Notice the word warfare isn’t spelled with f-a-i-r. The angry, caustic, unflinchingly honest screenplay indicts the entire society. While the somewhat unwieldy script–too many cooks– could be tagged as murky (undeveloped subplots), I think it plays it down the middle and has enough heat to task, outrage and shiver a 360° spin of whatever passes for a moral compass in a modern mega-city morass. 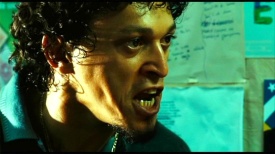 Regarding the idiotic Drug War and the hypocrisy of Authority, the movie accepts it’s a cruel farce, and depriving people justice guarantees anarchy. As for kneejerk palpitations over justified force, it basically says a bleeding heart left unarmed in one of the planet’s non-theoretical slum zones is asking for a body bleeding from every other organ. Innocence—you find in babies.

Very good, tough to watch, intense as hell. Acting is uniformly top-grade. With Milhem Cortaz, Fernanda Machado, Maria Ribeiro, Fábio Lago, Marcelo Valle. Box-office in the cloistered US was a teeny $8,744, but in eyes-wide-open Brazil it ripped up $14,058,000 against an estimated cost of $4,000,000. 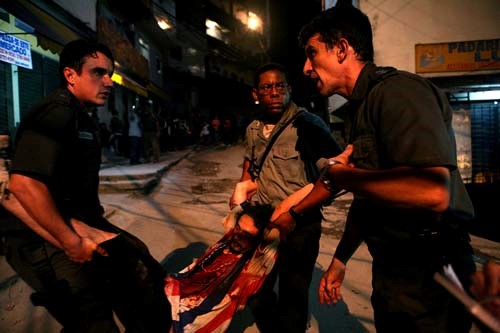 * The stunning 4-star sequel (head for the trusty Index) is one of the best crime stories since the heydey classics of the 1970s. This first go is based on the controversial book “Elite de Tropa”, by two former BOPE officers, Andre Batista and Rodrigo Pimental, with sociologist Luiz Eduardo Soares. The script was then written by Pimental, director Padilha and Bráulio Montovani (writer of the screenplay for City Of God).  As to politics, in places that still semi-function, comfortable and smug citizens spewing gas about the future need only look to the slums of Rio De Janiero (Lagos, Nairobi, Manila, Mumbai…) to see that—out there on the horizon— it’s already here, and The Future looks nothing like The Jetsons. 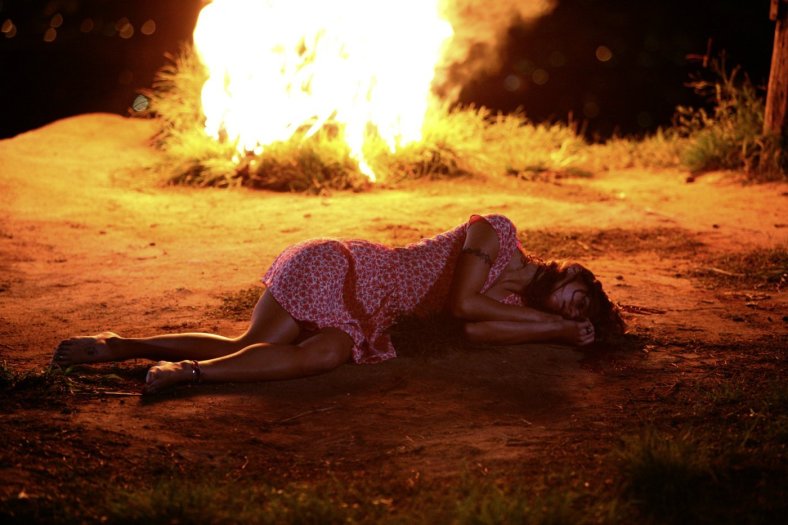