THE EDGE OF SEVENTEEN chirped in as a breath of tart fresh air in 2016, otherwise dominated by Heavy Dramas. Many of those were quite well done, but they left you pummeled. This bracing yet gentle addition to the inexhaustible branch of comedies that focus on the anxieties of teenagers is smart, fast, sharp and satisfying, real enough to zing some ouch with the zip of its dialogue and pacing, but peopled by folks you like and root for, anchored by another aced performance from the ever-blossoming Hailee Steinfeld.

“There are two types of people in the world: The people who naturally excel at life. And the people who hope all those people die in a big explosion.”

‘Nadine’ (Steinfeld) has a lot to endure: her popular-jock big brother (Blake Jenner), going to the same school, seems to get all the attention, and ditzy single Mom (Kyra Sedgwick) has her own basket of nerves.  Best friend (Haley Lu Richardson) falls for the brother, which Nadine interprets as treason, while unassuming ‘Erwin’ (Hayden Szeto–he’s 31!) has a timid crush on her.  Since an accident claimed her empathetic Dad (Eric Keenleyside), and her BGF has committed the sin of living her own life, the sounding board for Nadine’s rants and miseries is her history teacher (Woody Harrelson–excellent), compassionate under a veneer of deadpan wry, letting her know when she ceaselessly pesters him “Wow. I actually was writing my own suicide note just now. I have 32 fleeting minutes of happiness during lunch, which has been eaten up again and again by the same especially badly dressed student, and I finally thought I would rather have the dark nothingness.” 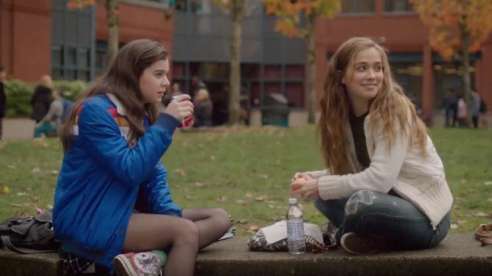 Writer-director Kelly Fremon Craig’s first directing turn is assured, and her script ripples with an authentic and fresh voice that shows a hoping heart beneath the brainy jabs (she’d written Post Grad seven years earlier, which drew scathing reviews, and sank like a stone. I haven’t seen it; maybe the critics were all wet–Ebert liked it). Instead of loading up the background with diverting pop tunes and parading a bunch of coarse skits, this concentrates on giving dimension to its characters; all of them are as well played as they are written. The key with this genre is whether or not you can relate and care: most of us can do the former, but we bank on the showmen to engage our empathy zone.  Commenting in “The Writing Studio” Craig said “I’ve always been intrigued by periods of rapid emotional growth and self-examination, when situations change around us, forcing us to step into new roles and re-determine who we are and how we feel about ourselves. I started this project in an effort to try to capture this particular age and generation as truthfully as I could and with a respect for the complexity and messiness of it all. Passing from youth to adulthood is intense and terrifying and beautiful, and in many ways the experience of anyone, any age, shedding their old self and becoming new.” 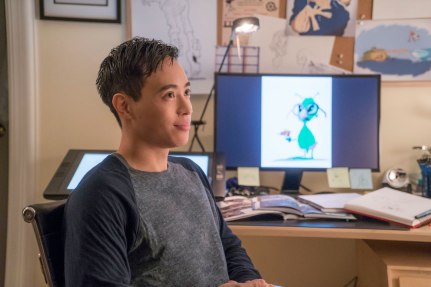 Craig was fortunate to be shepherded by co-producer James L. Brooks, who mentored her direction, and the 104 minutes have the intelligent Brooksian glide to complement Craig’s peppery wit.

Steinfeld masters the plank-walk between exasperating and endearing, her minutely flashed expressions and laser-guided delivery of Craig’s trenchant observations amounting to a one-woman acting class: her hopeful, hapless, haphazard Nadine shines in glory when the time comes. From her stunning debut at 13 in True Grit, it’s a been a signal pleasure to see her talent expand, and we’re blessed to look forward to many more years (she’s 20 here) of rich work from a disarming natural. And she sings, too!

Made at a cost of $9,000,000, despite widespread approval from those wielding keyboards, ticket-buyers only plunked down $18,146,000: it will earn stripes as time goes by. You can have the teeth-grinding gripes of Juno–take this deserving wallflower to the prom instead. “My entire generation is a bunch of mouth breathers. They literally have a seizure if you take their phone away for a second, they can’t communicate without emojis, and they actually think that the world wants to know that they are “eating a taco, exclamation point, smiley face, smiley face”, like we give a fuck.”  With Alexander Calvert, Katie Stuart, Nesta Cooper and Lina Renna. 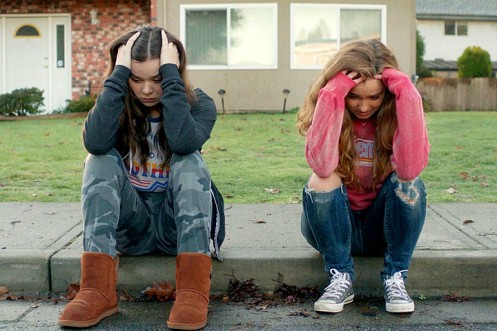 Though 2016 was submerged in bleak dramas (Moonlight, Manchester By The Sea, etc.), at least a few hours of smiles were granted, from this overlooked gem and from the spirits behind La La Land, Everybody Wants Some!, and Hail, Caesar!  Since every year releases a fresh group of teenagers from the wondering of childhood to the plundering of GrownupLand, the faucet of coming-of-age comedies is never tapped out. Add the delightful Ms. Steinfeld and the wise-wracking The Edge Of Seventeen to the Dean’s List of American Graffiti, Dazed And Confused, The Breakfast Club, Dope, Easy A, The Wanderers, Fast Times At Ridgemont High, Clueless, Bring It On, The Sure Thing, Risky Business……