THE MUMMY stirred from his four millenniums of sleep to shiver audiences in 1932, that most amazing year for horror films. Time marching, few if any alive recall its Depression days impact as a chiller, and as part of the pre-Code raft of artistically rich, thematically challenging pictures not yet stifled by censors.*

A British archaeological dig in 1921 Egypt (in the last of 39 years as a  ‘protectorate’ of Britain) uncovers the mummified remains of an ancient prince, ‘Imhotep’, buried alive after offending the Gods (didn’t take much, then or now).  Careless messing about with the forbidden-to-recite ‘Scroll of Thoth‘ brings the dead to life, and sends one unlucky snoop into cackling lunacy.  A decade later, calling himself by the somehow not reassuring name ‘Ardath Bey’ (Boris Karloff), the gaunt returnee seeks to inject new life into his lost love by sacrificing a young woman (Zita Johann) he believes is his reincarnated princess ‘Anhesen-Amon’.  He tells her “My love has lasted longer than the temples of our gods. No man ever suffered as I did for you. But the rest you may not know. Not until you are about to pass through the great night of terror and triumph. Until you are ready to face moments of horror for an eternity of love.”  That this will involve sharp objects and a bubbling vat of some of the Upper Nile’s special occasion embalming oil—well, if you’re serious about going steady?…

The second, larger audience for this artifact found it on TV in the late 50s and 60s, and action-hungry Boomer spawn, geared for the fangs of vampires and werewolves or the ray guns of robots got a few minutes of sedate weirdness out of what was otherwise a slow and talky snoozer, creakier even than Dracula.  It didn’t help that we were watching degraded prints, with weak sound on small television sets: time to go play. The quartet of shambling sequels were more fun: at least that/those mummies did something.

Maturity!, summoned by our own hourglass of sand trickling into the future (hopefully one without sixty yards of musty bandages and with a tongue), burying more distance in years between now and childhood than between JFK and 1932 (I may crumble into parchment before getting to the end of this paragraph…) we can better see and appreciate the artistic merits and stylistic strengths of this 73-minute excavation of haunted romance as well as noting that Kids Were Not So Dumb sniffing out antiquated acting and a grain-barge pace.

Screenwriter John Balderston borrowed ideas from his script for Dracula for his work here, directed by Karl Freund, who had done the camerawork on the Lugosi film.**  Also along from that picture were David Manners and Edward Van Sloan. Other than Karloff, who slides into scenes with a desiccated intensity, and the marvelous meltdown from Bramwell Fletcher in the superbly covered sequence when Imhotep comes to life, the acting is a bit of a slog. Leading lady Zita Johann has an exotic (and a bit deranged) look, but it’s a tossup as to whether her odd expressions and deliveries are intentional, inventive craft or just exhaustion and confusion: she and director Freund argued vehemently during the shoot. 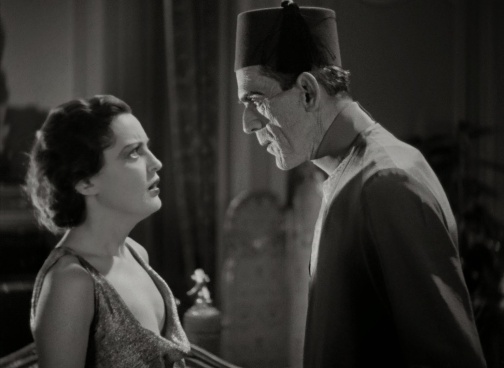 Produced for $196,000, it looks good, with extravagant art direction, fine lighting and the staging of the eerie segment showing the crime and punishment of Imhotep back in the day has notable effect. Music from “Swan Lake” plays over the titles. With Arthur Byron and Noble Johnson.

* Following in the tracks of  Dracula, Frankenstein, and Dr. Jekyll And Mr. Hyde from the year before, 1932 was awash with the macabre: The Most Dangerous Game, Island Of Lost Souls, Freaks, White Zombie and Murders In The Rue Morgue.

** Before he became a screenwriter, John Balderston had been a reporter and war corespondent. When King Tutankhamen’s tomb was opened in the mid 1920s, Balderston was at first the only foreign journalist in the Valley Of The Kings, facing threats and harassment trying to report on what he saw as “the supreme moment of all archaeological research”, an adventure that obviously played into his script for this classic. Burnishing the tone were a convenient trove of legends attending the fates of curious Europeans and their delving into Egyptology: a good read is “The Mummy’s Curse:The True History Of A Dark Fantasy”, by Roger Luckhurst.  Along with Dracula and The Mummy, Balderston had a hand in the screenplays for The Bride Of Frankenstein, Mad Love, The Lives Of A Bengal Lancer, The Prisoner Of Zenda and Gone With The Wind.