Story is simple and direct: cocky, self-mythologizing Dillinger (Warren Oates) and his crew break jail, rob banks, and lay down curtains of lead across the Midwest until, one by one, they’re ‘mopped up’ by publicity-minded FBI man Melvin Purvis (Ben Johnson). With a slim budget of $1,000,000, Milius makes the most of locations in Oklahoma and Wisconsin, period duds and autos, splicing in judicious use of some black & white photos and film clip montages to bridge the series of vignettes that introduce and bump off the cast.

Milius: “What I’m interested in is the legend. That’s what this movie is, that’s exactly what it is. It’s not a character study or a Freudian analysis; it’s an American folk tale.” Pre-gifted with colorful miscreants from the country’s rowdy, maverick criminal gene pool, the brashly confident writer-director energetically scrambles facts and chronology for the sake of aura. Fact-mangling is a given, as movies about those outlaws have always played that hand.*

Besides the sharp casting (Oates for one, a dead ringer for JD), the cheerfully anarchic Milius beefs up recreations of familiar incidents with outrageous and exciting fervor, turning what were brief shootouts into roaring gunfights that have enough hardware, racket and casualties to qualify as miniature wars. It’s overkill, but with exuberant flair: an unapologetic Guy Movie.** 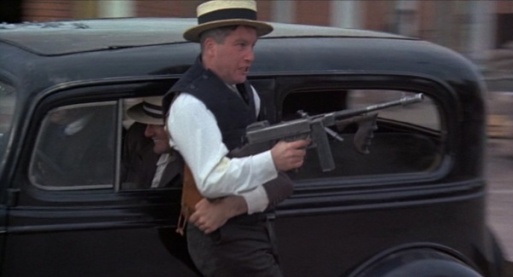 Oates’ brazen, touchy hoodlum isn’t who you’d want dating your daughter, but he’s charismatic, as one of the great character actors of the day brings his sly off-center delivery to bear. Ben Johnson makes a formidable Purvis, stern yet flamboyant (the G-man was a wild card himself).  Michelle Phillips got some acclaim in the trades at the time, but she’s the weak link in the cast.  Richard Dreyfuss, 26, plays it big, bantam strutting as a screw-loose ‘Baby Face Nelson’, while Harry Dean Stanton makes a great sad sack (albeit dog-dangerous) as ‘Homer Van Meter’: he gets some of the best dialogue.  Steve Kanaly suits the image of ‘Pretty Boy Floyd’. His death scene is a poignant little gem of Americana, backed by Barry De Vorzon’s music score making perfect counterpoint use of the folk song “Old Gospel Ship”.

Critics tipped hats, and the public spent $6,000,000, putting it 69th for 1973, boosting Milius enough to be able to go bigger with his next ambitious ride into fanciful history, the marvelous grand-scale adventure The Wind And The Lion.

Amid the cascade of gunshots from every vintage pistol, rifle, shotgun, B.A.R. and tommy-gun Milius could lay his paws on are Geoffrey Lewis, Cloris Leachman, Frank McRae, Roy Jenson, John Martino and John P. Ryan. Skittish knee-jerkers on the subject of firearms and summary justice should run for cover elsewhere.

* The 1945 Dillinger was utter fiction, as were the brisk Baby Face Nelson (1957), dead-on-arrival Pretty Boy Floyd (1960) and bargain basement pap Young Dillinger (1965). The highly touted Public Enemies (2009) also raised hell with accuracy: it just did so with bigger stars and cost one hundred times as much as this compact rampage. The FBI Story was a whitewash job for the Bureau in 1959, but its well-done snippets with these bank robbers are reasonably accurate.

** His script for Apocalypse Now contains Milius’ most quoted line of dialogue: “I love the smell of napalm in the morning.” While he was self-kidding machismo through ‘Col.Kilgore’s’ waxing over burnt gasoline, John Milius clearly loves the smell of gunsmoke, and liberal critics can’t forgive him his more reactionary stances. “If they move….”