THEY SHOOT HORSES, DON’T THEY?, directed by Sydney Pollack in 1969, whatever its other virtues or faults, nails two things to the wall. One is the sensationally good performance from Gig Young, easily the deepest and best of his career, a walkover Oscar winner for Best Supporting Actor. The other sure bet is that in a year marked by feel-bad stories, this film may be the most depressing of the lot, leaving audiences nodding heads in approval but thinking ‘maybe I’d watch it again–in about ten years.’ *  “Youza! Youza! Youza!”

Make that forty-seven years. Viewed today, the superb acting holds up, from Young and everyone else in the cast, and the mood still fits. Applauding again, knowing that next time I watch I’ll probably be thirty years dead already.

The Depression: desperate losers and hopeful dreamers compete in a marathon dance contest. Crowds pick favorites as hundreds of hours pass, the grueling event driving the dancers to physical, psychological and moral extremes. The 1935 novel was a blistering existentialist mocking of Capitalism’s brutish Darwinism and phony promises, a sour cousin to “The Day Of The Locust” (another deeply unhappy book and movie). Horace McCoy’s 121 pages (he wrote it while he was a bouncer at a pier in Santa Monica) became 120 minutes on film, adapted by feature veteran James Poe and TV specializer Robert E. Thompson to fit the hippie era’s similar rejection of the status quo’s tainted popcorn feast. Bring the kids! Let ’em know there’s no way to win. Right on! Where’s Jane Fonda?

Oh, right, she’s the star–and her fine work here elevated her drama credentials considerably, taking heat off the critical bashing she’d been doled for Hurry Sundown, Spirits Of The Dead and Barbarella. Pollack’s gift for guiding actors (it helped that he was an excellent one himself) also lifted Michael Sarrazin from a few years of lackluster training-wheels properties, and marked a high point for the up & down career flow of Susannah York, always quite good but often stuck in mediocre pictures that no-one went to see.**

Laudable as well are Red Buttons (usually hard to take, he doesn’t resort to mugging here) Bonnie Bedelia (faultless in her debut year on the big screen) and Bruce Dern (as suitably unlikable as ever).

Good as the rest are, Young gets the meatiest character, the choicest dialogue; his brilliant immersion into the seedy ‘Rocky’ is the poisonous glue holding it all together. Seeing the part as “a lifeline for a drowning man, a last chance to show (my) talent as a serious actor”, the affable Gig of earlier comedies and dramas revealed a much darker spirit beneath the smile. That Young’s own personal demons were at work adds extra creepiness to his depiction of the hectoring ringmaster. Apart from Rocky/Gig asides, exhortations and cruel smarm, the exhaustion highlight is the pain-stitched roller skate sequence, a grotesque marvel of coordinated effort from cast, camera, direction and editing. What will people do for glory and some bucks?  Too much and not enough. 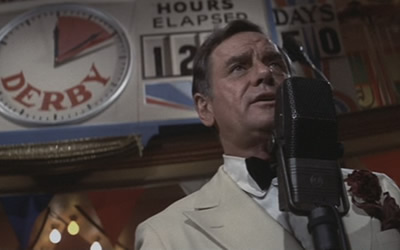 “Here they are again, folks! These wonderful, wonderful kids! Still struggling! Still hoping! As the clock of fate ticks away, the dance of destiny continues! The marathon goes on, and on, and on! HOW LONG CAN THEY LAST?”

Acting, direction, scoring, costuming, editing, art direction are all dead-on, but the nonstop unrelieved bitterness wears you out. After four flops (The Slender Thread, This Property Is Condemned, The Scalphunters and Castle Keep), Pollack at 35 found his mojo and struck grim gold with critics, peers and box-office. Along with Young’s triumph, Pollack was Oscar nominated, as was Fonda for Best Actress, Susannah York for Supporting Actress (she’s splendid), the Screenplay, Score, Art Direction, Film Editing and Costume Design. Produced for $4,860,000, it grossed $12,600,000, 16th highest for the year.

* Just as the Depressions breadlines drove people into theaters for glimmers of hope, Vietnam’s teargassed crowds ducked out of Nixonland’s drag for company-loving misery.   Times be a-changing, and along with ‘raindrops falling on heads’ and grit proven true, 1969s estimable roll call of bummers, buzzkills and argument starters included Midnight Cowboy, Easy Rider, Z, The Wild Bunch, The Arrangement, Alfred The Great, Burn!, The Rain People, Tell Them Willie Boy Is Here, Downhill Racer, The Happy Ending, Number One, Medium Cool, The Comic, Last Summer, Hard Contract, The Illustrated Man, The Gypsy Moths, The Grasshopper, Castle Keep and The Damned.  Add in the bloated let-downs Hello Dolly,  Battle Of Britain, MacKennas Gold, The Undefeated, Goodbye Mr. Chips, Che!, The Extraordinary Seaman, Marooned, The Great Bank Robbery and Oh!, What A Lovely War and it’s a wonder anyone had enough hope left to bother sticking around for 1970.

** Regarding the Oscars, miffed that they didn’t consult her beforehand (!), York didn’t win friends or influence tuxedos & tiaras when she said “I don’t think I have much of a chance and I didn’t think much of myself in it.” Uninhibited and fearless, still charged at 30 with a bit of youthful arrogance, her too frank blow-off of the Academy likely handed her gold statue away. They gave it to newcomer Goldie Hawn for Cactus Flower.