EXCALIBUR  was the magical sword only one chosen fellow could pull free from stone.  Despite 140 minutes of alternately furious or clumsy quarrying, noisily splintering chips into every nook and glade in the realm, this 1981 strain at excavating myth ends in exhaustion, prize unmoved. It’s almost as though, in the face of modern movie camera fiddle, dollops of oddly un-sexy nudity and gallons of splashed blood, the legends themselves exhibit self-defense.

Versions of the Arthurian Camelot sagas have been whispered, versed, sung, recited, written and filmed for at least nine centuries. Co-writing the script with Rospo Pallenberg, director John Boorman based their take mainly on Thomas Malory’s account from the mid 1400s.  Trying to cram in as much as possible it becomes a jumble, worsened by hatchet-whacked editing that makes it hard to follow by jumping from one segment of story time to another. Along with an ale-load of Malory, various threads of interpretation from other time periods and sources are woven in. The pretentious dialog is often laughable.

Ever get the feeling you don’t belong—in this movie?

It’s even harder to care than to track, because of woeful casting choices. King Arthur, Queen Guinevere and Sir Lancelot are three of the most famous and beloved characters in World Literature, but you wouldn’t know them from junior college as played by Nigel Terry, Cherie Lunghi and Nicholas Clay. Working actors all, and likely swell folks, but they summon so little charisma, heat or command here it’s hard to see how anyone would follow them to a pub, let alone into battle or boudoir. Too many of the secondary characters are made to heartily bellow their awful lines at each other as if they’re across a canyon instead of three feet apart: re-watching recently I had to check dates to see if Monty Python And The Holy Grail was done in response to this (it was seven years earlier). The “SIRE!” shouters include then-unknown, now old & familiar faces Gabriel Byrne, Liam Neeson and Patrick Stewart. 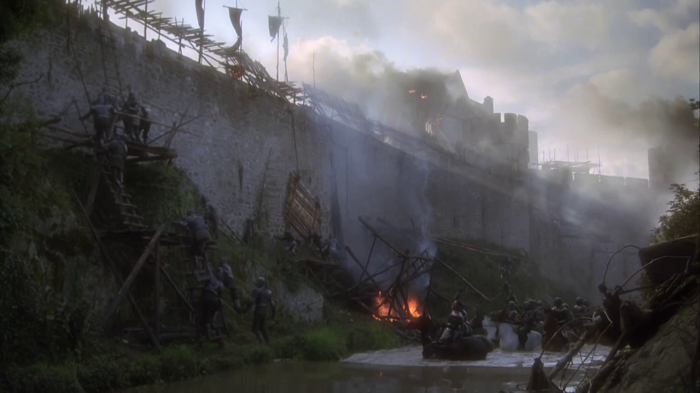 “Where have all the extras gone, long time ago..?”

Boorman’s art directors opt for a stagy look. The costume designers run wild; their creations are both inspired and magnificent as well as absurd—these are the shiniest, clankiest suits of armor in movie history. The boxy, ethereal framing also highlights how under-populated the settings are: you’re constantly reminded you’re looking at people playing make-believe in costumes, so tension is dissipated in the action scenes. You don’t go to a movie to watch a play.

Liam girds up to holler forth across table

The eye-catching costumes grace one of the decidedly positive aspects of the film, its densely rendered color. Most of Alex Thomson’s cinematography is lovely, as Boorman’s movies always look like a million bucks (this cost $11,000,000). Trevor Jones score works, especially when he adds a dash of “O Fortuna” from “Carmina Burana” to fire up some of the sallying.

While the leads are weak, and too many supporting players risk throat rupture, there are three noteworthy performances that, along with the visuals, help bail the moat. Robert Addie stirs a malevolent Mordred (a given that all Mordred’s are mean). Helen Mirren (can’t go wrong there) is vibrant, burning with vengeful passion as the twisted Morgana Le Fay. Best of all is the great Nicol Williamson, stalking through the tumult like he owns the forest, milking every ounce of wit and wile from Merlin and easily taking charge of any scene he’s in.

Reviews at the time were mixed, all citing the gorgeous look, most decrying the messy structure. Taking spot #18 for the year, it made $35,000,000, including several bucks from myself and some friends. We were let down, calling it Excali-bore. Looking again, 35 years later, I confess pretty much the same take. 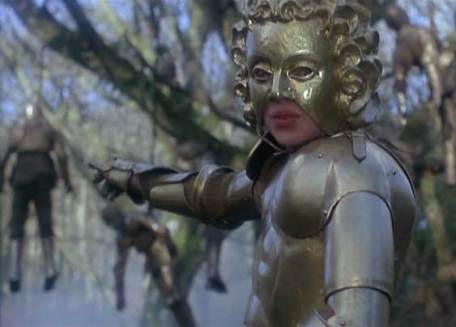 The  rich cinematography was Oscar nominated. Filmed in the greenest Ireland, with Keith Buckley, Corin Redgrave, Charley Boorman, Katrine Boorman and Ciaran Hinds. It was the film debut for Lunghi, Neeson, Byrne and Hinds. Boorman’s next two projects hit target dead center: The Emerald Forest doing justice to a hopeless quest and mystic visions, Hope And Glory brimming with the human warmth this sincere but sour epic sorely lacks.

Sonofasorcerer, he must’ve glued this thing