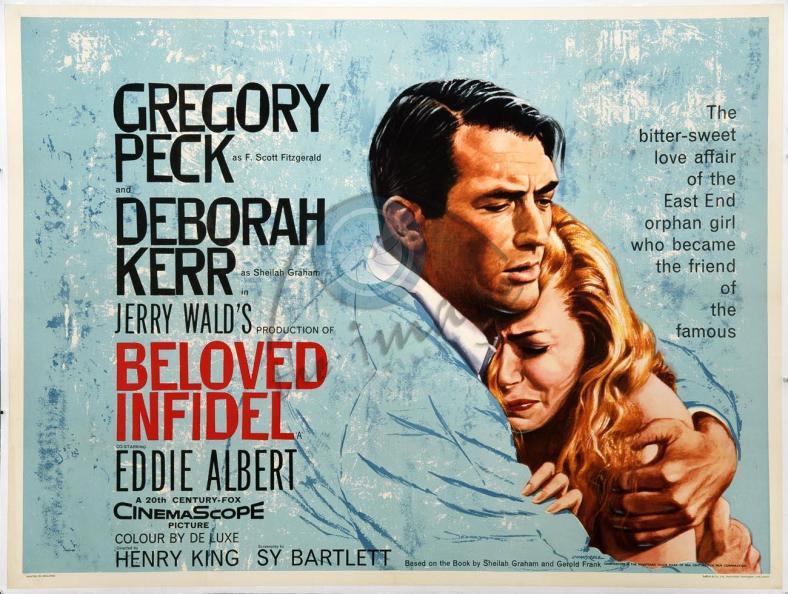 BELOVED INFIDEL didn’t feel the love in 1959. Derided by critics, disappointing its makers, the sluggish biodrama failed to enthrall the public, whose $2,200,000 only nudged 93rd place for the year, eaten up by the $2,340,000 it took to mount.

Unconvincing and unmoving over 123 minutes, despite two attractive stars and presumably interesting celebrity romance-tragedy to work with. Flatly directed by a tired Henry King, the pacing is glacial, the heavily re-tweaked script is clunky, and as a period piece (nominally a shoo-in with glamorous, name-dropping Golden Age Hollywood) it’s stagy and undernourished, the costumes too modern. Franz Waxman’s score dumps syrup.

The former Lili Shiels’s life story was genuine rags-to-riches stuff.  Re-inventing herself as Sheilah Graham (Deborah Kerr), the determined social climber with a knack on the typewriter became famous and wealthy as one of the ‘Unholy Trio’ of Hollywood’s scandal-digging career shapers–and maulers.  Prettier and more charming than Hedda Hopper or Louella Parsons, she managed to snag (better or worse—mostly worse, thank you, Fate), the alcoholic F. Scott Fitzgerald (Gregory Peck), on his way to being one of  20th-century Lit’s most celebrated wash-ups.  The movie covers the three tumultuous years of their relationship. Fitzgerald attempted a Pygmalion education of the impostor behind Graham’s sophisticated pose, and she tried to keep him from drowning in highballs.

Beyond looking good, neither star are at the top of their game. They remain lofty and removed, handicapped by script indecision, rushed-through filming, Kerr’s distraction from a divorce and Peck’s soured discomfort.  Writer Sy Bartlett had done well for the actor with Twelve O’Clock High, The Big Country and Pork Chop Hill but he came up short adapting Graham’s bestselling book; the conversations all come off as artifice. Not helping is King’s staid direction. At 73, the veteran had lost the precision and verve that had guided a long line of hits (including five with Peck, this sixth their last teaming). Ever the gentleman, his comment after was “it sort of left me a little flat.” King closed off his career with his next film, Tender Is the Night, also dealing with Fitzgerald, also a failure.

Peck was slammed in reviews for his inebriation antics (he dissed his work here, too), but King was gracious: “He knocked himself out from one end of the picture to the other to try to be Fitzgerald.” Getting plowed before a drunken-rage scene,”He scared Deborah Kerr half to death. You would think he was a drunken demon.”

Kerr recovered with an Oscar nomination for the warmhearted success The Sundowners, playing an earthier, much more accessible character: her migrant Aussie sheepherding ‘sheila’ had more sex appeal than Graham’s poised-to-perfection society dame.  Peck dealt back-to-back hits in On The Beach and The Guns Of Navarone, stories where his men were confronted by demons (nuclear fallout and Nazis) that required resolve and leadership instead of self-pity and wallow—in other words, man-up Gregory Peck Stuff as opposed to Poor Rich Me/Pour More Gin wastrels.*

With Eddie Albert (thankless, as a disguised Robert Benchley), Philip Ober (Deb’s jerk husband of From Here To Eternity, thoughtful here), Herbert Rudley, John Sutton, Ken Scott, Karin Booth (as a disguised, maligned Alice Faye) and Jack Kruschen. The locations look swell in CinemaScope, at a house in the hills of West Hollywood (1325 Miller Drive, if you want to cine-snoop) and the beach at Malibu. 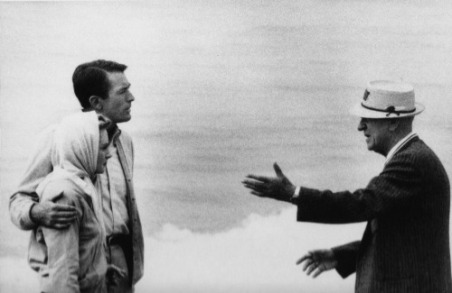 * One of the better lines in the script has Fitzgerald consoling Graham: “Beautiful young people are accidents of nature. Beautiful old people create themselves.”  He didn’t make it, dying at 44. Graham outlived him by 48 years, passing on in 1988.  Apart from “Beloved Infidel”, she wrote three more memoirs and ten other books.  “I won’t be remembered for my writing. I’ll  be remembered as Scott’s mistress.”  I remember squirming through this as a kid. Few grown boys are going to give much a hang about it, either. ‘No, I can’t make the game, I’m going to spend two hours watching an indulged gossip columnist and her wimp lush argue over who deserves more fame’—click. 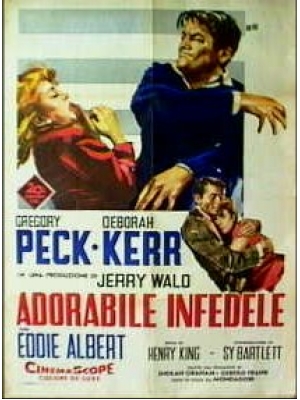