BABES IN ARMS—-‘Mickey Moran’, ‘Patsy Barton’ and other children of vaudevillians get together to put on a show. They do it to help the old folks and to keep themselves from being stuck in a state work farm. Nothing Can Stop these kids, raised on Apple Pie & Coca Cola, and by gosh, they might just “put the show on right here!”

Snubbing this kind of merry silliness as dated corn is meaner than sawing an inch off a leg on grandma’s walker: those who decide on watching, once they get into the general, genial idiocy of the whole shebang, will be rewarded with some dynamite blasts of talent.

Mickey Rooney, 18, generates enough energy to turn a cruise liner into a hydrofoil; he was Oscar nominated as Best Actor. Judy Garland, 16 in her first teamup with Mick (same year she landed in Oz, fabled 1939) gives it all she’s got. It’s fairly contagious.

“Listen, are you kids willing to stick together and pull yourselves out of a hole? I’ve got an idea. Our folks think we’re babes in arms, huh? Well, we’ll show ’em whether we’re babes in arms or not. I’m gonna write a show for us to put on right here in Seaport! Why, it’ll be the most up-to-date thing these hicks around here have ever seen.” 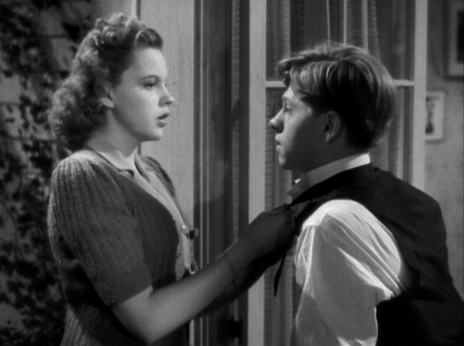 From a play by Rodgers & Hart, produced by Arthur Freed for $748,000, it was directed by Busby Berkeley, though he dialed back some on his flamboyance.  Several of the songs are pleasing, and the youthful stars make up for any lack of innovation. Along with Rooney’s work, it was Academy Award nominated for Music Scoring.

After a decade of Depression and with World War darkening the horizon, this was 94 minutes of escapism the country wanted and needed.  Coins rained upon MGM to the tune of $3,335,000, the sixth most popular movie of the year.