I’LL CRY TOMORROW  could have been what Susan Hayward said after losing what seemed a sure thing, a win from her 4th Oscar nomination as Best Actress —and to someone’s first Hollywood film, her first in English language even, as she was a darned foreigner to boot!  Anna Magnani, volcanic in The Rose Tattoo, didn’t even bother to attend because she knew she stood little chance against Hayward’s stops-pulled, down & dirty, hold-the-glamour blitz in this 1955 biopic. Ironically, it was directed by Daniel Mann, who had also guided Magnani to her prize.  Competition in that claws-unfurled category was strong that year, but it was Hayward’s to lose.  Given her rep for saltiness, about as battle-shy as Patton, maybe Susan cried tomorrow, but after the ceremony was over it was more likely the tempestuous 38-year-old trouper was probably throwing, with velocity, whatever was handy, at anything she could hit.*

The real-life character Hayward plays was a natural dramatic-progression fit, topping her three previously nominated works. In 1947s Smash-Up, the Story Of A Woman she was an alcoholic singer. In 1949 with My Foolish Heart, drunk again.  With A Song In My Heart, from 1952, once more a singer (Jane Froman).

Lillian Roth was a boozer to the very sharpest point of no return. Her descent was shown in a famous 1953 appearance on TVs This Is Your Life and fully bared in her 1954 autobiography. Pushed from the time she was a child, Roth was a Broadway success and popular in early talkies before liquor, men and collected trauma put her on the skids to the bottom.

The screenplay, by Helen Deutsch and Jay Richard Kennedy,skips her movie work, tones down Roth’s tally of six husbands to three and leaves out child abuse and periods in asylums, but at 117 packed minutes it’s painful enough, and was bracing for the time (much as the same year’s The Man With The Golden Arm  looking at drug abuse). Physically similar to the petite and once-beautiful Roth, Hayward did her own singing here, effectively belting out a number of tunes, including Roth’s signature “When The Red, Red Robin” and “Sing,You Sinners”.

Hayward was a flamboyant over-the-top actress, who could heave bosoms, pout, stomp, make shoulder-dislocating turns violently enough to cow Lana Turner or Joan Crawford and pretty much vamp it up into absurdity (David And Bathsheba, Demetrius And The Gladiators,Untamed, The Conqueror–OMG) but with decent material to sink those scenery-chewing teeth into and the right director channeling her tenement-spawned ferocity, she was arresting, and she brazenly runs full throttle (bottle) into Roth’s ugly spiral.  It’s superior,startling, brave work here, with some of the best drunk scenes ever, de-glammed rawness that scorches through technique and style into gritty reality. It’s hard not to applaud. 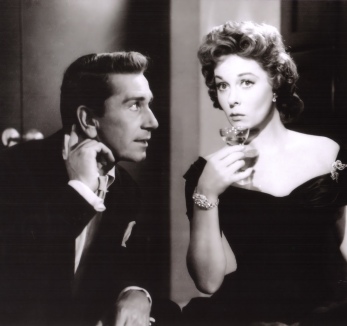 She sets off fireworks with screen newcomer Jo Van Fleet, playing her domineering mother. Only two years older than the star, the antithesis of a shrinking violet, Van Fleet in a stunning film debut year also shone in director Mann’s competing The Rose Tattoo and cinching a Supporting Actress Oscar for East Of Eden. She’s better here.

The men Hayward’s Roth contends with, in order: Ray Danton, doomed (debut year, as a nice guy for once–that would not last, he was just too oily); Don Taylor, fed up; Richard Conte, cruel and abusive; Eddie Albert, kind and understanding. **

Mann’s direction of the actors is sure, and the drama is powerful, though the production design is perfunctory, even with $2,147,000 to work with; too many of the hairstyles, clothes, props and musical arrangements are at odds with the period setting.  Nonetheless, along with the star it was nominated for Cinematography and Art Direction and won an Oscar for Costume Design.  Reviews lauded one of the biggest hits of the year. Released for Christmas, it earned $7,727,000.

With Margo (Eddie Albert’s wife of 39 years,here in their only film job together), Virginia Gregg, Don Barry, Peter Leeds, Tol Avery, Veda Ann Borg, Henry Kulky and—in one brief but memorably icky bit—Timothy Carey, as a derelict the sodden Roth apparently has slept with: enough to put anyone on the H2O wagon for good.

* Professional is one thing, personal another.  1955 was a rough year for Hayward, as she was undergoing a grueling and public divorce, which had duly affected her full participation in her other ’55 assignments prior to this, the adventure sagas Untamed and Soldier Of Fortune.  No doubt she vented her personal tribulations into Roth’s thrashings.  Sublime to ridiculous, she followed up this gem with the laugh-riot folly The Conqueror.  A compensation award three years later for I Want To Live finally put the feisty redhead on the Academy stage, but the dozen weak pictures that followed diminished her hard-won legacy (though the camp value from Back Street, Where Love Has Gone and especially Valley Of The Dolls can’t be ignored).  In 1955, aside from Magnani (who was magnificent), Hayward faced down Katherine Hepburn, glowing in Summertime, her 6th nomination; rival hard-breather Eleanor Parker’s third and last time up, for Interrupted Melody, and Jennifer Jones noble suffering over Love Is A Many-Splendored Thing (her 5th and last).  Parker was also portraying a singer, as did the Academy-ignored Doris Day, superb in Love Me Or Leave Me.  Director Mann excelled in getting wrenching performances from women: he’d previously guided Shirley Booth to her Oscar for Come Back, Little Sheba and would help Elizabeth Taylor nab one for BUtterfield 8.

**Albert’s real-life character, Burt McGuire, became her last husband in 1955. The scion of Funk & Wagnalls Publishing, McGuire is portrayed in the film helping Roth into Alcoholics Anonymous. More script tweaking, as she actually joined AA nine years earlier. They stayed married until 1963, when he left her a note and skipped, after cleaning out their savings account, leaving her destitute,again (bad marriages and worse drinking saw her squander a million bucks). Lillian Roth died of a stroke in 1980, age 69.  Susan Hayward passed away in 1975, at 57, from cancer.  McGuire lived to be 103, dying in 2013. 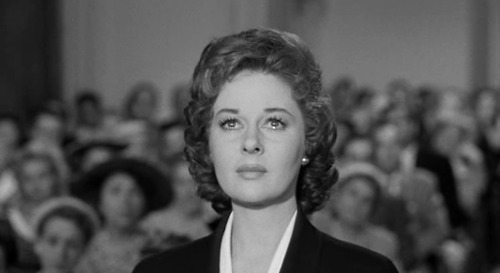 One thought on “I’ll Cry Tomorrow”