THE SECRET OF SANTA VITTORIA was a huge success as a book in 1966, spending 50 weeks on the NY Times bestseller list, 18 of those at #1.  Three years later, when the 1969 movie came out, an unofficial cabal of high-placed, high-minded (within their own closed circle) movie critics, who had been gunning for producer-director Stanley Kramer for years, attacked it mercilessly. Considered a failure at the box-office since its world-wide take of $6,500,000 didn’t cancel its price tag ($6,300,000), the double whammy ushered in the fall from grace of the controversial film-maker.*

A small hill town in Italy, 1943. Famed solely for their wine, when Mussolini bites the dust the “eh,whatever” residents install local buffoon ‘Italo Bombolini’ (Anthony Quinn) as Mayor.  The doltish drunkard must try to rise to the occasion when German soldiers occupy the town and demand its hoard of more than a million bottles of vino. How to hide the juice?  At what cost?

Along with publicized, if suspect, critical venom (most people outside elitist cocktail parties amazingly not giving a flying frig what Pauline Kael and fellow harpies thought), four things sank this project.  As he was charge, Kramer’s direction takes the first three on the chin. In a leisurely 139 minutes, he allows several scenes to overstay their welcome. Too fond of composer associate Ernest Gold, he let him run riot on the loud and insistent score, which re-honks the numerous sections Kramer and his editor fumbled.  Main offender is star Quinn, who takes his Earthy Peasant act and rams it deep enough into the ground that it almost emerges in Tibet, one of the few regions the Play It Big actor left off his tally sheet.  Bambolini is supposed to be a drunken clown and an idiot, but Tony shouts enough here (look! I’m a carefree Italian!) to make Lee J. Cobb blush. We like our man Quinn, but this time his mugging i shameless, the worst performance of his career.**  The fourth element was simple timing. In the post-Bonnie And Clyde/2001: A Space Odyssey headiness of 1969, with rebellious young crowds flocking to Easy Rider, Midnight Cowboy and The Wild Bunch, these broad hide-the-Chianti antics felt more like they belonged in the period they were set in. Too much, too late. 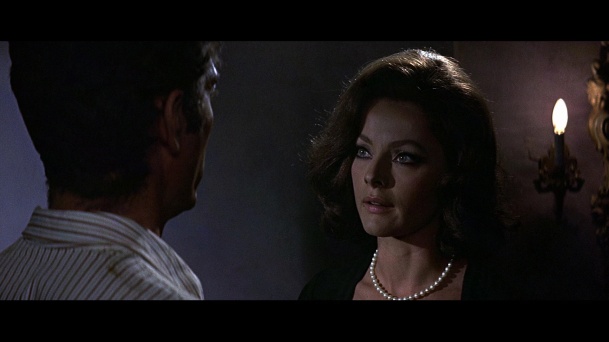 Too bad, because the script (William Rose & Ben Maddow) has some funny lines and the co-stars are excellent. Earth-moving firebrand Anna Magnani flares it up as Bambolini’s disgusted wife. Famously physical, she’d worked with Quinn before on the powerfully dramatic 1957 Wild Is The Wind, but she didn’t cotton to him this time. Kramer in his autobio: “”He and Magnani didn’t get along at all. It’s a wonder their scenes ever got finished. She didn’t like him one bit, and in their big fight scene, when she was supposed to literally kick him out of the house, she did it so hard during the shooting that she broke her foot!”

Helping hugely (and making the film worth a look just for them) are the great Virna Lisi (a love-wounded and alluring Contessa) and always engaging Hardy Kruger (duty-bound but humane German officer), both nailing every scene they’re given. Also doing well is singer Sergio Franchi, in his only major acting job.

The lush production values are well-captured by cinematographer Giuseppe Rotunno. Santa Vittoria itself had modernized; after a canvas of 169 towns the picturesque artists haven of Anticoli Corrado stood as location. The centerpiece of the story is impressively handled in a lengthy sequence when 500 extras (the locals playing the locals) hand-pass thousands of bottles of wine to stash from the Nazis.

Along with Kramer’s misread, the Oscars muffed it by nominating the movie for Film Editing (see below) and Gold’s overbearing music score.  Despite those flaws, and if the first twenty-five minutes of Quinn’s exaggeration doesn’t put you off, the story and supporting cast gradually pull you in.

* Kramer never recovered his earlier mojo. He did five more feature pictures and they all bombed: R.P.M., Bless The Beasts And Children, Oklahoma Crude, The Domino Principle and The Runner Stumbles.  The Academy’s nomination for the Film Editing, along with a nom for the slog of Hello, Dolly! was one of the most unforgivable gaffes in their history as they then left out room for the brilliant editing of The Wild Bunch.  That’s enough to make you open several bottles of stashed wine (or cavort in a vat with ‘Tector’ & ‘Lyle’). Ernest Gold worked on eleven projects for Kramer, doing great jobs for On The Beach and It’s A Mad, Mad, Mad, Mad World.  He just got carried away this time round.

** While he registered to great effect over many years in a wide variety of roles, after 1964s Zorba The Greek Quinn fell into a Man Of All Ethnic Seasons pattern that wore thin. Though he worked that angle overmuch, and hammed it to pieces in this instance, his energy was incontestable and his range was truly geographic: Mexican, Filipino, American Indian, Eskimo, Greek, Mongol, Hun, Romanian, Italian, Ukrainian, French, Spanish, Judean, Anglo, Chinese, Portuguese and Arab. “I am a RIVER to my people!” 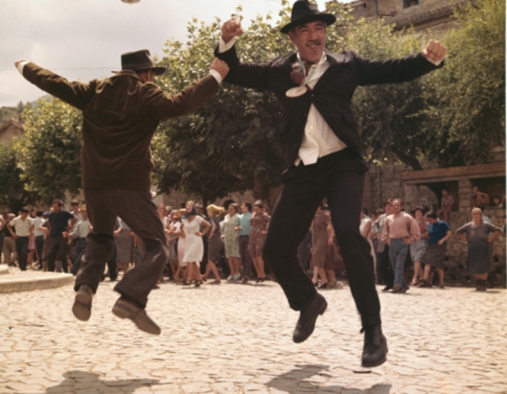