CAPTIVE WILD WOMAN—-with a title like that, you better have hard science backing up any claims, so we’re relieved when ‘Dr. Sigmund Walters’ tells us that Vitamin E-2 “determines the physical characteristics of all life forms.”  Whew, we wondered that his patient, suffering a “glandular disorder” was going to recover, since she exhibited “secretion of unusual amounts of the sex hormone”. 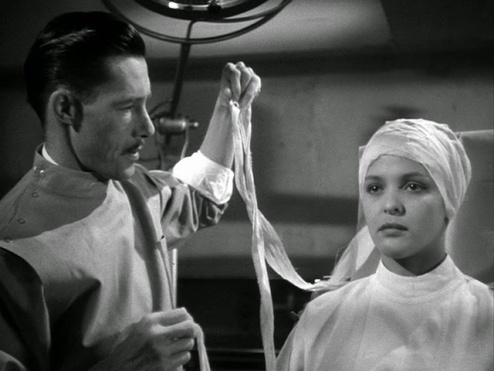 Since Vitamin E (without the 2) had only been discovered in 1922, the 1943 audience for this 61-minute sequel & pinup-generating fright classic may be excused for wool pulling, but if they factored in that the doctor was played by John Carradine, and that he was transferring the life juices from an ape (one of the silliest of all guy-in-gorilla costumes) to the patient, resulting in what one critic called “gorilla interrupted”, an exotic va-voom babe who has an unsettling habit of turning into a murderous furball….* 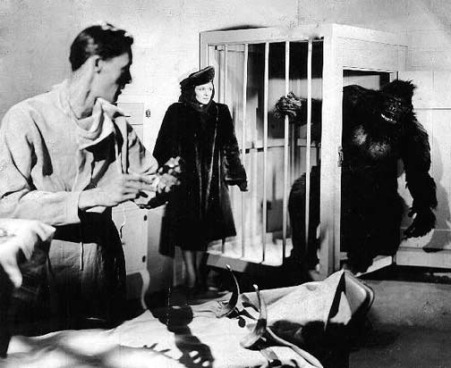 Remember ‘Doc’ on Gunsmoke?  Milburn Stone was once young (39 here), and even played a few leads. He’s a circus big cat trainer whose fiancee (Evelyn Ankers, “Queen of the B’s”) is sis to the experiment girl, part of whose precious bodily fluids end up circulating (via gorilla and a dead nurse who was foolish enough to speak up) into the title vixen, the one and only Acquanetta. “Introduced” here, Acquanetta had done uncredited bits in two films, but this launched her into a three year run of schlock fame before fading away into the mists of trivialand.**

It was Carradine’s first lead role, and his first mad scientist. When his lunacy and results are questioned, he explains with a shrug: “I have myself partly to blame”.  That goes over better than Milburn’s hoof-in-mouth, after he’s been doing the animal-taming gig like Clyde Beatty, teasing Ankers with the gem”I wonder if you’ll be so easy to train after we’re married?”  Talk about apes.*** 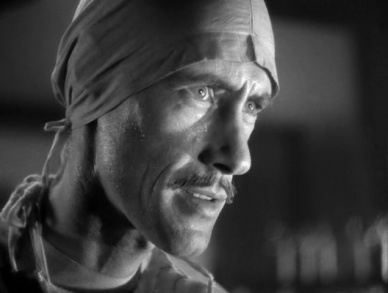 A hit with kids and a hoot for GIs overseas, this was followed in ’44 by Jungle Woman. Ankers and Stone return—his billing demoted, maybe because of that dum-dum wisecrack—along with the mysterious Acquanetta, half sexpot/half simian.  A third entry, in ’45, Jungle Captive, featured Vicky Lane (wow! now there’s an ape-girl!), the fur-finished Acquanetta having moved on to the ‘classier’ fare Dead Man’s Eyes and Tarzan And The Leopard Woman.

With Martha Vickers, Fay Helm, Vince Barnett, Paul Fix and Ray “Crash” Corrigan’ as ‘Cheela the Gorilla.’  At least one good example of working your way up the ladder is shown by the director credit for Edward Dmytryk, who would later handle many A-list productions. 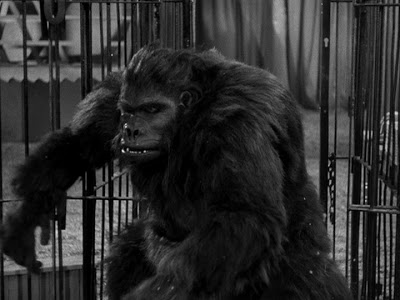 * I direct the reader to the estimable info and consistent hilarity to be found at “And You Call Yourself A Scientist”, from which goldmine I acknowledge “gorilla interrupted”.

** “The Venezuelan Volcano” was 22 when she became the Captive Wild Woman.  Purportedly an Arapaho orphan from Ozone, Wyoming with the name Burnu Acquanetta, which was supposed to mean “Burning Fire, Deep Water”, she actually may have been Mildred Davenport, an African-American gal from Norristown, Pennsylvania.  Does any of this matter?  Not to Immortality, which she achieved not only with her monkeygirl makeup and killer human curves, but with what she supposedly did later to her philandering husband in Phoenix: filling his Lincoln Continental convertible with cement. Right on, Wild Woman!  She lived to be 83. 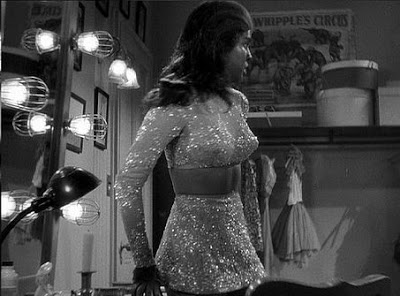 *** The downside to watching this idiocy (forget the artistic heights) is the extensive footage of real-life lion & tiger tamer Clyde Beatty from his 1933 The Big Cage.  It’s the whole whip, chair & pistol “training” that doesn’t sit well today.  While seeing Beatty alone in a cage full of lions & tigers is undeniably a “holy cow!” kind of sensation, the scenes of a big African lion and a huge Bengal tiger furiously fighting it out are hard to take as amusement.