BENEATH HILL 60, a mound atop a ridge in Flanders, Belgium, saw 990,000 pounds of explosives detonated on June 7, 1917; one of the biggest non-nuclear man-made blasts in history.  It was heard in Dublin, 420 miles away.  A desperate attempt by the stymied, exhausted British Army to break open German lines in the mud & blood soaked landscape near Ypres. Two years of frontal attacks hadn’t worked, so “gentlemen, let’s make a hole”.*

Another gripping and sad WW1 saga from Australia, which fed a generation into the Empire’s meat grinder, this fine 2010 story makes a fit memorial companion to go with the grand epic tragedy Gallipoli.  Scenarist David Roach and director Jeremy Hartley Sims adapted from the diaries of Captain Oliver Woodward (Brendan Cowell), who led the ‘1st Australian Tunneling Company’, civilian experts at excavating earth more than they were trained fighting men: their talents given the unenviable duty of making sure the big bang boomed.

$9,000,000 went into the detailed recreation of the bleak No-Man’s Land setting, the claustrophobic underground, and the calm beauty of rural Australia. That last is shown in flashbacks as Woodward leaves civilian life and fiancee for the slaughterhouse of the Western Front.  His tight-knit unit races to meet an unsympathetic deadline from impatient generals while battling ghastly working conditions. If the continual danger from shellfire, filth, grief and exhaustion wasn’t enough, there were the daunting natural elements and the furious counter-mining efforts from the enemy.

Cast is superb, action scenes taut, sound effects, costuming and art direction high quality. Despite good reviews, it only amassed a gross of around $3,441,000, having limited mass audience appeal.  Too bad, as it’s a solid document of hair-raising bravery and legendary Aussie pluck in unimaginable circumstances and a moving addition to the sparse cinema roll call that chronicles those frightful days.  You like these characters and care what happens to them. Brendan Cowell has quiet charisma to spare.

* A certain Gen. Harrington’s dry comment to the press before the event: “Gentlemen, we may not make history tomorrow, but we shall certainly change the geography.”  Gallantry meets Futility.  World War One: the timeless lesson of what our leaders really think of us. 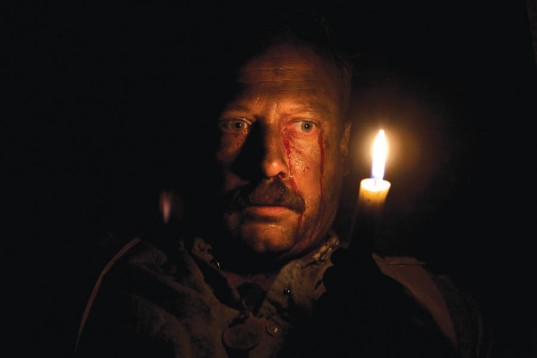