THE VELVET TOUCH came out in 1948, then vanished down the rabbit hole until recently, when it has been rediscovered as an entertaining and offbeat blend of melodrama, film noir and sardonic theater chatter (tending to camp). In the last iteration, peeking behind stages to reveal unwise cracks in the brittle facade of bonhomie, it beats All About Eve to the punch bowl by three years. 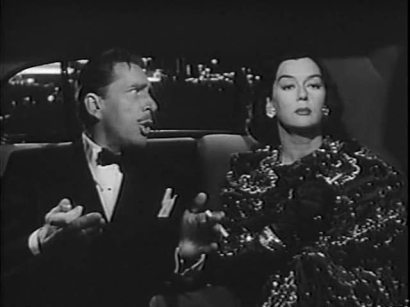 Driven to a frenzy by cruel baiting and threats of slander from her lover/guru/producer, a celebrated Broadway actress bonks him to death with a statue.  Flashbacks reveal the lead-up, and in due course over the 100 minute running time the crime is investigated.  Director John Gage has cameraman Joseph Walker imbue enough shadow and depth to the look so that it fits into the noir caseload, while the cat-nippy script from Leo Rosten & Walter Reilly alternates between near-overheated melodramatics (lot’s of pauses for effect and pretend-they-won’t-notice reaction shots) and droll banter about thee-a-tuh, daww-ling types trying to out-snide one another. “I’ll tell him things that’ll make him want to wash his hands every time he touches you” (to be said with waspish hiss).

Guilty as charged and having wicked fun with it all are Rosalind Russell, Leo Genn, Leon Ames, Claire Trevor and Sydney Greenstreet, all experts at taking morsels of dialogue and manner and smacking them down with relish.  One sample of the script’s puck is the character name given to Trevor: ‘Marian Webster’.  Russell is in her smart, beleaguered diva element (she was coming off back-to-back Oscar nominations for Sister Kenny and Mourning Becomes Electra ).  Roz’ wardrobe is snazzy—she could carry off flamboyant headgear with a panache that would impress Cleopatra (one of her outfits was later emulated for Kim Basinger in L.A. Confidential).  The producer was her husband, Frederick Brisson (“The Lizard of Roz”), who lavished $1,500,000 on richly detailed sets, so all the backstabbing and snootiness get a suitably foofy backdrop. 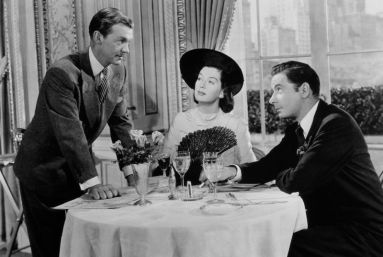 Who’s flirting with whom?

Essentially trivial, but as a witty and professional product of its day, highly watchable, and, considering the coarseness we accept as wit today, the arch bitchiness crosses the time warp into the rather endearing.  Genn employs his marvelous voice, Ames shows why he was such a reliable authority figure, Trevor gets to chew curtains in style while melting down and Greenstreet is allowed to be a good guy for a change (and not lose that patented ‘harrumph’).

With Frank McHugh, Walter Kingsford, Dan Tobin (acidic and not so subtly gay, unusually frank given the time period), Lex Barker (29, a year before he swapped tuxes for loincloths as ‘Tarzan’) and Russell Hicks. Determined 24-year old Martha Hyer has a small role.