LEGEND OF THE LOST , a rather cheesy 1957 adventure, makes for lazy fun to kick back with for 109 minutes, thanks to Bygone Era star-gazing and striking cinematography.

Like the stratovolcano Mt. Vesuvius, six miles from her native Naples, 23-year old Sophia Loren erupted on international screens in a 1957 triple blast.  Emerging from the Aegean, dripping wet in a barely-there blouse in Boy On A Dolphin, she took every frame of celluloid away from from an overpowered Alan Ladd and Clifton Webb. Next, she seduced Cary Grant while managing Frank Sinatra and a giant cannon in the epic The Pride And The Passion. Capping the year was this salvo that put her up against John Wayne and Rossano Brazzi, in a trek across Libya, produced & directed by ill-tempered Henry Hathaway.

Robert Presnell’s hold-the-logic script, doctored by Ben Hecht, has untamed rogue ‘Joe January’ (Wayne) talked into guiding cultured, idealistic treasure hunter Brazzi and more practical prostitute Loren out of the huts of Timbuktu and into the vastnesses of the desert, looking for a lost city. Will the men fight over the woman?  Will they get lost?  Have to deal with suspicious tribesmen?  Run out water—and more crucially, out of whiskey? *

The twin Italian sex symbols and the American icon are an odd match-up, and it’s not what you’d call, er.. believable, though they command interest through sheer charisma.  Wayne is both good and bad (miles better than a similar spin in the dorky Blood Alley), saddled with a caustic and not-too-likable role; Brazzi his usual expressive and passionate self, laboring under the scripts loopiest character arc as he goes bananas (figs?) from greed, lust and dehydration; Loren feisty and game (another bath scene—3-fer-3 with scripts making sure she got undressed & soppy at some point during the running time).  Months of uncomfortably sweltering location work in the Libyan desert had the budget at $1,750,000 (some sources $3m).  Returns were lukewarm–the $6,300,000 finding spot #38 for the year, and reviews were dismissive apart from consistent praise for the visuals.

It looks stunning because behind the camera was ace Jack Cardiff, and the majestic expanses of the North African settings are crystal clear.  Cardiff: “The Sahara desert during the day was a simmering, ferocious furnace, but at night so numbingly cold it was like being in cryogenic suspension.”  A major bonus is the extensive use of the monumental 3,000-year-old Roman ruins of Leptis Magna—a World treasure now off limits thanks to the dismemberment of Libya as a functioning, flourishing nation (for whatever shifting reasons are demanded from the Terror War).

Hathaway ungraciously didn’t think Loren had anything to offer (“She has no depth. Never did have, never will have.”), and considered the movie “a fiasco”. The director’s notoriously low-boiling point noted, the similarly fuming physical temperatures ranged from 120 in the shade down to 30 at night. The spartan digs almost did her in–permanently– when an accident with a space-heater came within minutes of asphyxiating her with carbon monoxide. Wayne thought she was having an affair with Brazzi and was irked (Brazzi was fiercely loyal to his wife). Whatever diff she and The Duke had during filming didn’t seem to affect her recent observation on him:  “They (Hathaway and crew) were giving me a hard time because of my English, and he told them, ‘This girl, she laughs and she’s very happy, leave her alone, don’t bother her with this and that.’ He was very easy to work with, a beautiful man. He gave me a very nice present. Spurs! I still have them hanging here on my bedroom wall.”

Enjoyable trash, a treat for the eyes, co-starring Kurt Kasznar. Helping out is an atmospheric score from A.F. Lavagnino, who racked up over 200 film credits as composer.

*Glenn Erickson’s funny write-up at CineSavant tickles the numerous bits of ‘business’ around canteen-throwing and all those readily appearing bottles of hooch. 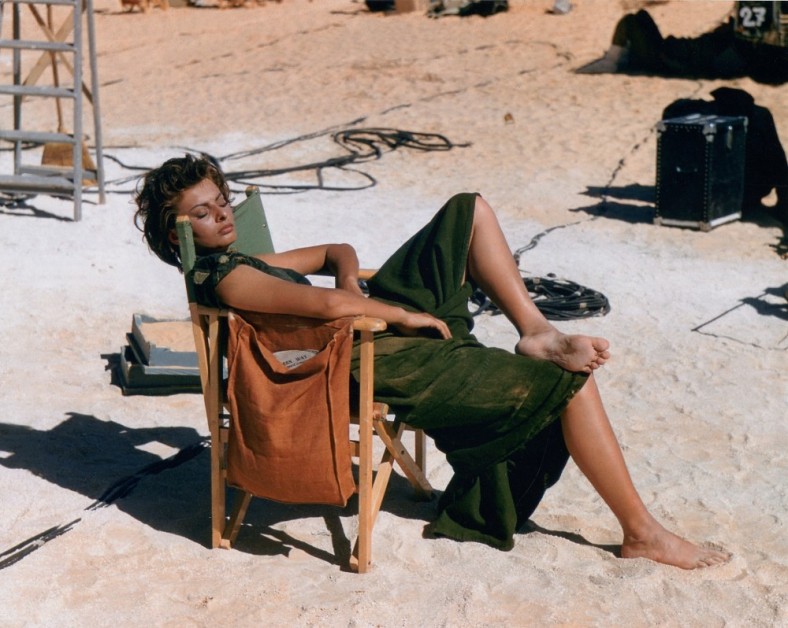