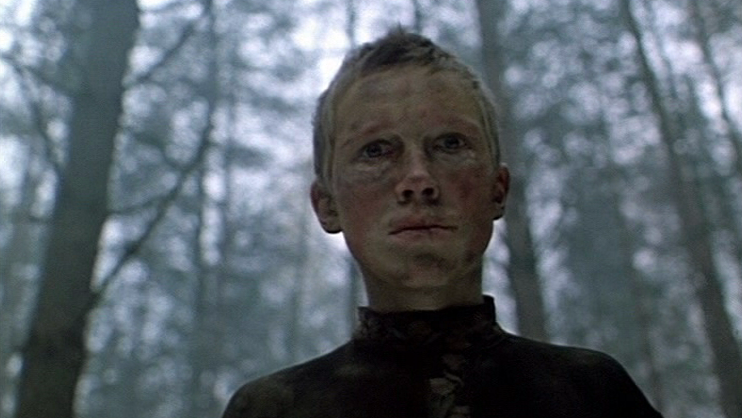 COME AND SEE—-when you hear one of your fellow citizens chest-thumping about how we should “bomb the hell” out of some place, it’s a good bet that the closest they’ve ever been to hot lead is manning a pencil sharpener. This brilliantly realized, unrelenting, unforgettable 1985 Russian journey into Hell makes mincemeat out of most war films and its bombardment of kaleidoscopic imagery sears the hot air of saber rattlers into so much poison gas.

1943, Belorussia (today’s Belarus). Naive teenager ‘Flyora’ (Alexey Kravchenko) joins a guerrilla group to fight the Nazis, while ‘Glasha’ (Olga Miranova) the dreamy girl he is fond of, stays in a local village to care for civilians. A German Einsatzkommando unit arrives. 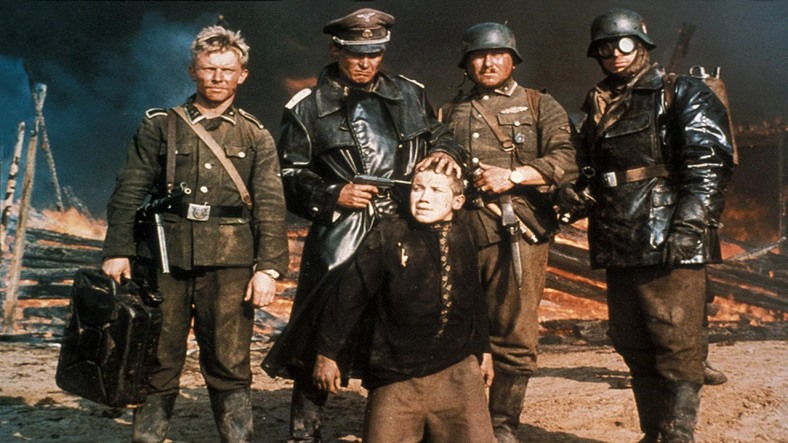 Unlike contemporary orchestrators of movie mayhem, director Elim Klimov and screenwriter Ales Adamovich lived through WW2.  Klimov as a youth survived Stalingrad and Adamovich based the script on his experiences as a teenage partisan. The only thing ‘heroic’ they present in the dizzying 142 minutes is simple Survival.  Action, its very nature keyed by excitement and suspense, is the mainstay of combat films and the elephant-in-room of anti-war movies—you may think a battle of wills over building The Bridge On The River Kwai shows up the futility of conflict, but there’s no arguing how damned pulse-racing and spectacular things are when the bridge is blown up. Saving Private Ryan, and many other superb cinematic tales of its stripe show the price in gore but they also get the blood going with “how did they do that? how could I do that?” energy. 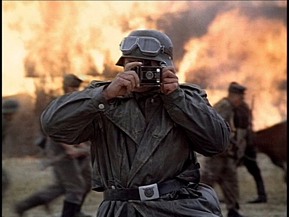 Klimov and Adamovich offer unflinching horror. It’s nothing within miles of fun, but you can’t look away. It’s not a movie you ‘like’, but one you cannot easily forget.  One critic wagged that it was “an impressionist masterpiece, and possibly the worst date movie ever.”  A good line, but I’d counter by saying if your date is intelligent and unafraid enough to sit through it like a grown-up, maybe you ought to hang on to them.  Adamovich challenged gunshy audiences: “Let them not watch, then.”

Stunningly shot by Aleksei Rodionov, acted to perfection, edited to a honed bayonet point by Valeria Balova, directed with a verisimilitude that would knock Sam Peckinpah off his bar stool. Klimov used live ammo in some scenes, bullets whizzing inches from actor Kravchenko’s head.  I’ve never seen crowds of extras handled with such flawless interaction.  The village centerpiece is a veritable whirlwind. You feel there–and you thank God you were not–or are not yet.*  An awful and magnificent achievement.

Unsurprisingly, a huge hit in Russia. With Liobumiras Laucevicius, Vladas Bagdonas, Juri Lumiste. Viktor Lorents is the SS Major with the pet simian.

* Like an arrogant high school jock poking a nuclear-armed stick at a nest of Giant Asian Hornets, the recent, ongoing, increasing rhetoric from certain American politicians and their presstitute whores is nothing short of insane.  Portraying Russia as keen for conflict ignores the little historical fact of their 25,000,000 dead in 1941-45. They know War means something beyond applauding special effects from a couch. Try bellowing “USA! USA!” while you’re being incinerated in a fireball.

The title comes from The Book of Revelations description of The 4 Horsemen of The Apocalypse: “I heard the voice of the fourth beast say ‘Come and see’.  And I looked, and behold a pale horse: and his name that sat on him was Death, and Hell followed with him.” 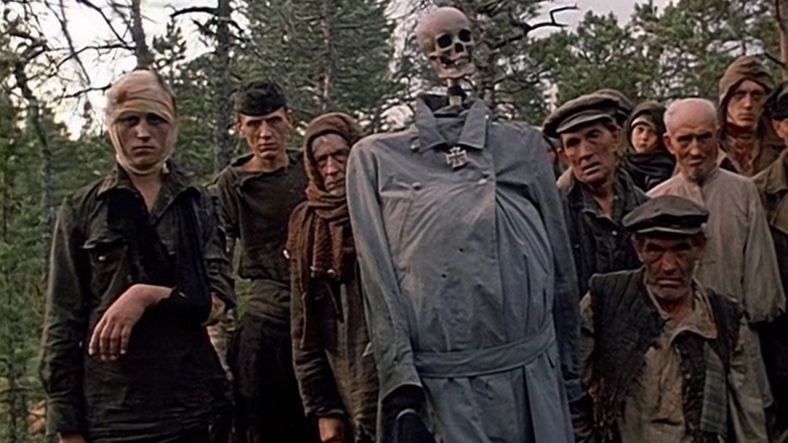