BONNIE AND CLYDE—beautiful murderers with a sense of style, blazing a lighthearted trail across the Dust Bowl, earning the admiration of simple farm-folk and foiling nitwit Keystone Kop pursuers at every turn. The irk that the real couple were a nickel & dime punk and not-exactly-dreamy tart, despised not only by their hapless victims (the poverty-stricken Midwesterners of the 30s) but by their gun-slinging contemporaries like John Dillinger, is conveniently sidestepped by director Arthur Penn, who deftly got away with a lot of truth distortion in his movie career.

Not to say Penn wasn’t a skilled filmmaker; for while his storytelling is a lie, it’s a beautifully crafted and fascinating fib.  What he orchestrated here, with the full-bodied, argumentative participation of his producer/leading man, is poetically violent pop tragedy, instant-Americana, turning fact into legend ala Ford’s westerns.  Approve of the narrative route or not, you’ll be engrossed in the headlong momentum, wit, fury and dash of its 111 minute crime-wave; brilliantly acted, edited and photographed, as it careens between homespun comedy and trend-setting mayhem.

The cast ensemble is uniformly flawless. Later committed work in Reds, Heaven Can Wait and Bugsy  notwithstanding, this remains Warren Beatty’s most vital, charged and charming performance.  At 29, apart from Splendor In The Grass  back in 1961, Beatty hadn’t clicked on screen, remaining—other than movie-mag gossip headlines for his love life— a promise without delivery.  The screenplay even has a line that hints at Beatty’s status in the business at the time: “You’re advertising’s just dandy. Folk’s would never guess you don’t have a thing to sell!”   It just took the right role and timing.

26-year old Faye Dunaway’s film career was only a few months and two films old when this catapulted her into the big-time. Sexy?  Is Godzilla tall with bad breath?  She puts so much restless heat into her Bonnie Parker that simply knocking off a bank to please her seems chintzy: for this torrid Texan toots it’s Ft. Knox or nothing.  Ever-jangled Estelle Parsons and perpetually goony Michael J. Pollard went on to bigger parts but none that would eclipse their defining work here.  Gene Hackman’s plum characterization of the hearty ‘Buck’ sped him to star status at 37; Gene Wilder(debut) shows the ace-timed comedic gifts that would do the same for him.  Typically faultless support comes from Dub Taylor and Denver Pyle.* 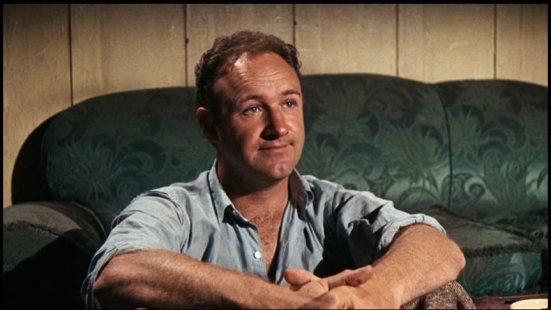 Though the excellent script by David Newman and Robert Benton  (Robert Towne polished up) may sling hash with the truth, it’s flush with great dialog.  Along with the verbals, the cast deck out in slick duds (kicking off a retro fashion trend), barrel around in vintage autos and engage in the bloodiest shootouts the screen had seen to that point.  These startling and exciting gunfights set a milepost for the escalation of vivid film-gore that eventually became a flood. This packs extra punch-power because Beatty, influenced by George Stevens’ use of sound in Shane, cranked the volume on the familiar Warner Brothers gunshot effects to better jolt the audience.  The effects crew used up 30,000 blanks in making the action scenes.  The ad campaign laid it on, questionably but shrewdly, with “They’re young, they’re in love and they kill people“.

Initially dismissed by offended highbrow critics it was considered a drive-in throwaway until a few keen observers raised a ruckus, pinching some of the Value Gods to do the Unthinkable and… reverse their opinions.  Bracketed by The Graduate‘s generation-gap appeal to establishment-soured youth and The Dirty Dozen, with its brazenly honest portrayal of war carnage minus soft-soap while Vietnam was raging, the existentialist outlaw movie became a giant hit.  It stole #4 in the States, earning in excess of $70,000,000 worldwide, erasing its $2,500,000 cost, making Warren Beatty a rich rogue on a scale the pathetic Clyde Barrow could never imagine. That coup came about, ironically enough, from greed, as Warner’s had so little faith in the movie that they demanded Beatty lop his salary in lieu of a 40% cut of profits which they did not think would materialize: errrps…

With Evans Evans, Mabel Cavitt and James Stivers—as the beefy butcher who comes after Clyde with a meat cleaver.  Music score by Charles Strouse was muted, but just when needed it was given an adrenaline kick by the injection of “Foggy Mountain Breakdown”, licked like crazypants courtesy the irreplaceable Flatt & Scruggs.

This landmark classic shook the rafters in 1967 and remains a helluva flick today.  Just keep in mind while you’re watching that you are being expertly manipulated to feel empathy for a pair of killers who deserved no more tears than the average dipshit who robs a 7-11 and shoots the clerk.

* The character played by Pyle, Frank Hamer, a Texas Ranger captain, was a legend in the Southwest, having face-to-face showdowns with outlaws some 65 times.  In the movie he’s a vengeful buffoon, a caricature which enraged his family enough that they sued for slander. Blanche Barrow also went to court, humiliated by the Penn-Beatty fabrications.  Actresses considered for Dunaway’s 1967 Bonnie break:  Ann-Margret, Natalie Wood, Sue Lyon, Tuesday Weld (best of the batch), Carol Lynley, Leslie Caron, Cher, Jane Fonda and Julie Christie. They were right-on with picking Faye. She was paid $30,000.

By a Winchester-mile, the best book on the Barrow Gang is Jeff Guinn’s fascinating “Go Down Together: The True, Untold Story Of Bonnie And Clyde.”

Screen-wise, there was a terrible 1958 cheapie, The Bonnie Parker Story, with a game but script-riddled Dorothy Provine doing what she can as Bonnie and Jack Hogan as ‘Guy’ Barrow (?–who are they going to offend?). Hogan would become known to a generation of boys as ‘Kirby’, the B.A.R. wielding joker on Combat.  The 2013 mini-series?–uh, let’s just not go there.

** What the hell?–let’s knock off First Federal. In The Heat Of The Night, a solid film, won Best Pic, but B&C is better.  Beatty lost to Rod Steiger–excellent in In The Heat Of The Night, but both were bested by fellow nom Paul Newman’s enduring Cool Hand Luke. Paul’s co-star George Kennedy rightfully walked away with the Supporting Actor trophy, just as Parsons was the ace in the women’s category.  Cinematography, for this, was a good call.  Penn’s direction should have taken it over Mike Nichols for The Graduate.  Dunaway’s carnal hellcat was better than winner Katherine Hepburn’s respectable sweetness in Guess Who’s Coming To Dinner? 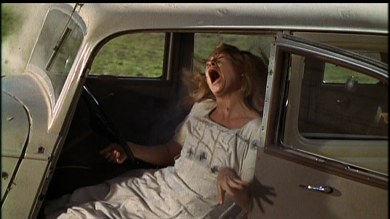 Costumes went to Camelot–we’ll concede.  This was not up for Film Editing (‘Night‘ won), which was a crime, or Sound (‘Night’), ditto.  Writing, in this category (Story & Screenplay Written Directly For The Screen), went to the safe Guess Who’s Coming To Dinner: both this and fellow nominee Two For The Road were better.  “We rob banks.”  Well, why the hell not: don’t they rob us?

2 thoughts on “Bonnie And Clyde”