THE QUILLER MEMORANDUM—-one side of the James Bond wave produced a spate of spoofs (Our Man Flint by far the best ). Flipside were the Serious Spy Stories, usually so dull no-one stayed for the finish (best generally conceded to be The Spy Who Came In From The Cold ). This 1966 snorer joins the latter group. Lifted from the first of nineteen ‘Quiller’ novels by Adam Hall*, this has the bad luck to be flatly directed by Michael Anderson, who leaches anything like excitement out the coy script by Harold Pinter.

Casual (to the point of inert) agent Quiller (George Segal=bored/boring) investigates a neo-Nazi ring in West Berlin. Credit the publicity guys for that tag-line on the poster above, “he’s the most exciting man you will ever meet”–I guess if you’ve never met anyone else. 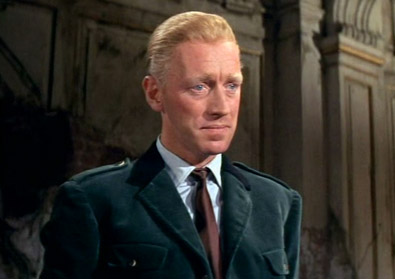 Max Von Sydow makes the most of his scenes as the quietly intimidating bad guy, but Alec Guinness, Senta Berger** and George Sanders are wasted. Lagging at 105 minutes, aside from the turn by von Sydow, there is a rather poignant song, “Wednesday’s Child”, sung by Matt Munro (of From Russia With Love glory) that is part of John Barry’s scoring.  Reviews were mixed, box-office low at $3,500,000.

*Prolific are we? ‘Adam Hall’ was actually one of the ten pseudonyms used by  Trevor Dudley Smith, who eventually changed his name to Elleston Trevor. ‘They’ collectively managed to write at least 84 novels, as well as short stories, scripts and radio shows. Best-known of the lot may be “The Flight Of The Phoenix”.  Smith/Hall/Trevor/ was not too thrilled by either Segal’s acting or Pinter’s scripting for this film, adapted from the 1965 “The Berlin Memorandum”.  On Segal: “..he’s certainly not Quiller. He doesn’t look harrowed enough. He doesn’t look weathered enough.” On Pinter: “obviously an extremely fine playwright, but I think he hasn’t got the knack of adapting. I think he’s too obtrusive.”

** Beyond stunningly sexy decoration, 60s producers and directors could never seem to figure out quite what to do with the gorgeous, intelligent and intriguing Senta Berger. Out-of-place in the western epics Major Dundee and The Glory Guys, along with The Quiller Memorandum she was chiefly used as eye-candy in mediocre espionage movies. Witness: The Secret Ways, See How They Run, The Spy With My Face, Bang! Bang! You’re Dead!, The Poppy Is Also A Flower, The Ambushers, To Commit A Murder.   Much-honored for theater and TV work in Germany, she became president of the German Film Academy.  A major crush from boyhood….