THE FOUR FEATHERS—-massive and magnificent, best of the batch of marvelous British Empire epics from its era and next to Gone With The Wind  the most awesome entry, production scale-wise, to cinema glory from that unmatched year of 1939.  A.E.W. Mason’s story of sacrifice and heroism in the Sudan of 1898 was filmed thrice before as silents, remade thrice since: this version, produced by Alexander Korda, stands pith helmet and Union Jack above the others, with scenes of spectacle grand enough to have been spliced into a number of second features. 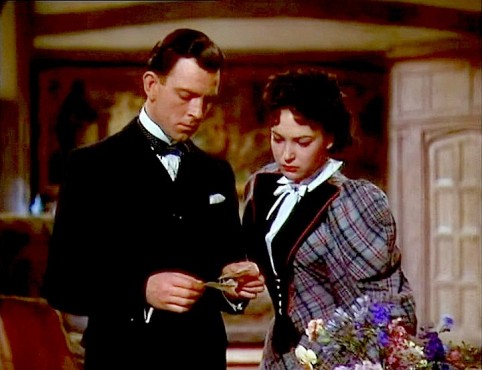 Raised on service tradition and daunted by tall tales of soldierly blood & thunder from Waterloo expounded by the father of his fiancee, ‘Lt. Harry Faversham’ (John Clements) resigns his commission on the eve of his regiments departure for service in Africa, off with Gen. Kitchener to avenge the fall of Khartoum.  Three close comrades and his shamed fiancee leave him with four feathers of a dove, symbolic of cowardice. Seeking to erase this stain on his honor, he follows the army across the desert, disguised as a native, and in due course shows that his upper lip is the stiffest one around.

Under the superlative direction of Zoltan Korda emerges a panoply of high adventure with few equals.*  Holding nary a pound in reserve, the dauntless Korda production team traveled over a thousand miles up the Nile, through Egypt into the Sudan to shoot on the authentic locations, capturing the vastness of the desert with visual sweep that would not be bettered until David Lean’s Lawrence sashed over Arabia in 1962. 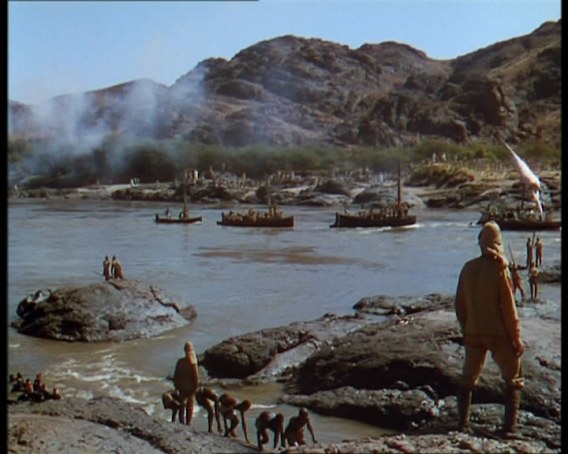 Warming up for the numerous blockbusters he would later grace is maestro Miklos Rozsa, providing an exotic musical backbone to the saga, a soundtrack eloquent, descriptive and exciting but never intrusive.  John Clements makes a solid mark as the hero, who goes so far as being branded with a hot iron to help his disguise—talk about anything for a girl!  Ralph Richardson is allowed a scene of sunstroke that’s a near-definitive interpretation of exhaustion and panic; the never-bested C. Aubrey Smith ‘pshaws’ his way to immortality as the blustery retired British brigadier to end them all.

Action fans, fix bayonets for the Battle of Omdurman: thousands of fanatical Dervishes and wild-eyed ‘Fuzzy Wuzzies’ sprint and gallop across the sand into the massed rifles of Lord Kitchener’s infantry, while at the same time a hellish prison compound is stormed from within and without, a marathon melee long unmatched. This wingding is just one of several jaw-droppers.  Building-up to it there is the flat-out stunning sequence of the British Army on boats, being dragged up the cataracts of the Nile by countless numbers of native slaves; a surprise attack and massacre of a regiment and the vulture-haunted aftermath, superbly edited; glimpses of the ruthless Khalifa Abdulah’s filthy prison have the imagination shudder.  Among the milling extras were men who had witnessed, and in some instances, actually participated in the real events, on the same spots, some 40 years earlier. 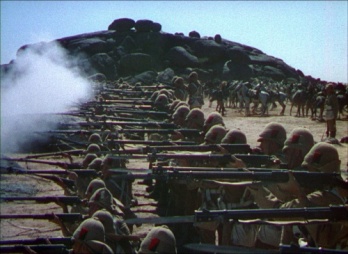 *Consider the bravehearted company: Lives Of A Bengal Lancer, The Charge Of The Light Brigade, The Drum (also from the Korda brothers), Wee Willie Winkie and Gunga Din.  On a roll, the passionate Korda clan went on either producing or directing with The Thief Of Bagdad, Jungle Book and Sahara.  Remakes of this giant: in 1955 as Storm Over The Nile, re-using footage, blown up to fit CinemaScope; for TV in 1977, well done, with Beau Bridges, Simon Ward and Jane Seymour; in 2002, on a big scale but tiresomely revisionist and a major dud, with Heath Ledger.  The 18-year long Mahdist War is the quintessential Arrogant Colonialist vs. Insane Religious Maniac hoedown.  Watch Khartoum, read “The Triumph Of The Sun” by Wilbur Smith.  A.E.W. Mason’s book was written in 1902.