FLAME AND CITRON—-stylish, controversial 2008 Danish WW2 thriller is another entry in the recent spate of European features that have revisited the conflict from the angle of the resistance movements. It’s better than the overrated Black Book (the Netherlands), but not nearly as effective as the stirring Max Manus: Man Of War (Norway). Often compared to Army Of Shadows (France), but not having seen that one will hold my fire (or cyanide capsule) si vous s’il vous plaît. 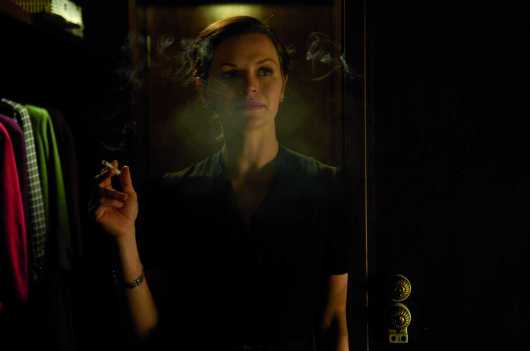 This rough noir, directed and co-written by Ole Christian Madsen (after eight years research), eschews the stone-set black v. white/good v.evil template for a more nuanced revisionist take, focusing on the price paid in loss of humanity, honor, and sundered relationships when engaged in the business of killing people in cold blood. Fair enough, though while it serves oodles of details, action and double-crossing, and has a thoughtful script with good dialogue, it doesn’t fully deliver the emotional pull it promises.

Still, quite watchable, with a good period look and fine acting, including the always arresting Mads Mikkelsen.  Budgeted at $7,600.000, it was one of the costliest, most elaborate films out of modest Denmark, where, naturally enough, it made most of it’s $10,000,000 take (and sparked the hottest debate). Overlong at 130 minutes, it’s a mixed bag, but a sure thing for WW2 movie fanciers. With Thure Lindhartd, Stine Stengade, Peter Mygind and Christian Berkel (the dogged Nazi on the hunt for the heroes).