CYRUS—funny 2010 comedy-drama from the Frustration Department has divorced and depressed John C. Reilly (great again) lucking out by meeting warm and attractive single mom Marisa Tomei (basically the dictionary definition of ‘warm and attractive’), and they soon begin a romance.  Main hitch is a doozy, in the large, weird form of her son, played by Jonah Hill.  Hill dials back on the noise level from his earlier roles displaying off-putting obnoxiousness; he makes ‘Cyrus’ a believable creep, jealous and obsessed with Mom, but one with enough humanity about him that’s pitiable (he’s a 21-year old New Age musician for a start: strike one), so that his weirdness doesn’t upset the movie like it does Reilly’s flummoxed suitor.

Written & directed by Jay & Mark Duplass, in another of their witty, incisive and simpatico looks at loneliness, ala Jeff Who Lives At Home.  The mixture of dark & sweet, goofy & real is ultimately winning because it likes its characters and doesn’t stoop to mocking them for laughs. The three leads are faultless, encouraged by the Duplass brothers to improvise; they’re all more than up to it. Catherine Keener makes a strong backup as Reilly’s fed-up, but kindly ex-wife who’s getting remarried (to Matt Walsh). 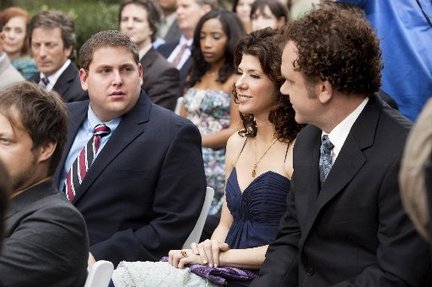