ANNIE GET YOUR GUN  originally took Broadway by storm back in 1946, running 1,147 performances, and Irving Berlin’s musical-comedy has played in a bevy of stage revivals since. It was a big hit on the screen in 1950.

Seen today, other than the eye-drop-summoning Technicolor costumes, it’s a chore, what with the woefully outdated (and flatly stupid-offensive) ‘Injun’ stereotypes. Subsequent revivals have toned down that aspect out of p.c. (and simple decency), but beyond “There’s No Business Like Show Business”, the score isn’t memorable—and then there’s Betty Hutton.  She had a fanbase in her decade-long movie run of 19 features, and Ms. Hutton certainly had an interesting life (do some readin’ on that thar Net, yonder) before and after, but her shtick remains an acquired taste.  Now, according to the 95% reliable Glenn Erickson a.k.a. ‘Cine Savant’, watch The Miracle At Morgan’s Creek and she’ll win you over.  It’s on the list, but based on The Greatest Show On Earth (oh, brother..) and this, I have to temper praise for the brassy blond beyond acknowledging that she was a for-sure energetic trouper. Meantime, until I wise up, I’ll stick with Doris Day’s Calamity Jane.

Anyway, the plot of the 107-minute yippee-fest concerns legendary sharpshooter Annie Oakley and her raucous run with Buffalo Bill Cody’s Wild West Show.  I like Americana as much/more than the next fussbudget lib, but it’s hard to get jazzed up nowadays by the brazen fraud of Mr. Cody.  The Native American pantomimes here (directed by George Sidney and an unaccredited Busby Berkeley) are really hard to take, though I’ll grant the great  J. Carrol Naish with giving his all to Sitting Bull (not many cheers raised from people living on the reservations). 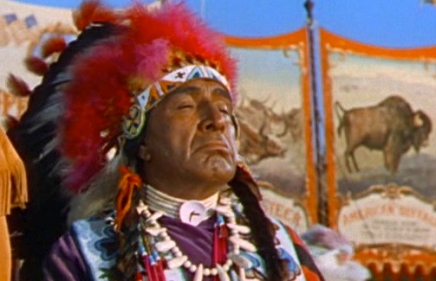 * The original budget was $1,500,000 but trouble plagued it from the get-go, chiefly having to replace a truculent, falling-apart Judy Garland.