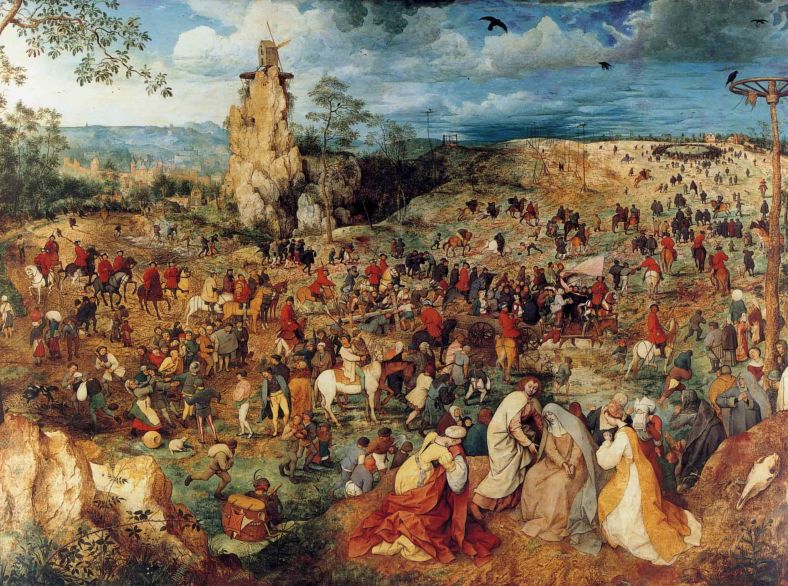 THE MILL AND THE CROSS—-ingenious one-of-a-kind 2011 historical drama takes an audacious concept from author Michael Francis Gibson, lets him share credit for the screenplay with director Lech Majewski and crafts an alternately enchanting and unnerving 92 minutes that breathe tactile life into a canvas of time and place.  ‘Canvas’ literally, taking a 1564 painting, “The Way to Calvary”, by the Flemish master Pieter Bruegel the Elder, and pulling you live-action into the vast swirl of its epic landscape, populated with over 500 characters: peasants, nobles, tradesmen, clerics, merchants, soldiers, lovers.  It’s akin to what you did as a child with your toys, giving spark to the inanimate–the cowboys and dolls, cars and trains, plastic monsters or simple chunks of material that you’d unpack and spread out into your own created Worlds.  The writer & director let you ‘step into’ the painting, and its unsettled time period.  A birds-eye view of the pastoral and profane sharing space and moment with the benign and brutal. 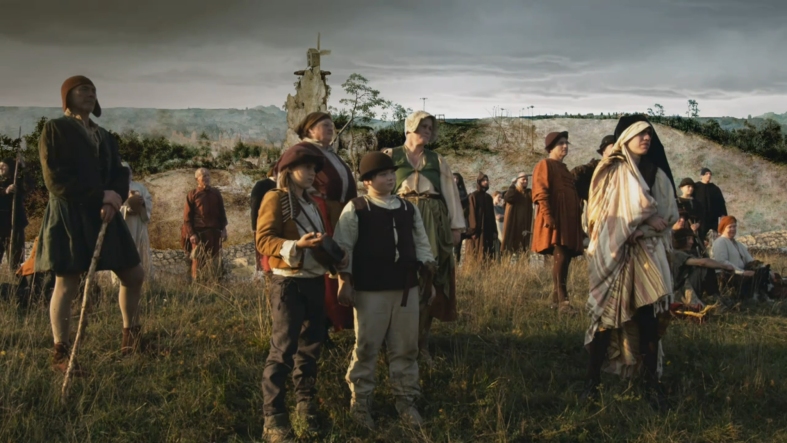 Using special effects to envelope instead of batter,Majewski blends his live actors–Rutger Hauer, Charlotte Rampling, Michael York among them— into their painted counterparts, and the story moves about the canvas to swoop in on assorted singles or clutches of people, among their animals and architecture, dealing with the events of their day. That day was during a period of religious persecution: in this case it was Spanish Catholics against the Protestants of Flanders (Belgium).

Seeing the time & experience-weathered faces of Hauer, Rampling and York, vital and exciting sensual presences of international cinema from an earlier era, here matured into their late 60s, adds its own fine grace note of continuum to the wondrous fusing of art, allegory and agelessness that Bruegel captured. His masterpiece melded political commentary to a spiritual paean in a kaleidoscopic triptych of everyday life.  Much of what’s on view is tragic–this is no Monet’s garden depicted.  Like the painting, the film is astonishing and beautiful, ugly and unsettling: a remarkable vision to behold.  With  Joanna Litwin and Marian Markula.