MADIGAN —-hard-nosed veteran New York City detectives Richard Widmark and Harry Guardino pursue ruthless and nutty escaped killer Steve Ihnat, who got the drop on them and stole their guns. Meantime, tight-arsed, humane but hypocritical commissioner Henry Fonda deals with assorted crises, including his marital infidelity. Widmark’s wife, Inger Stevens, is fed up with the stresses of being married to the force.

No emotional doors get overly rattled in the too-familiar home front segments (which dominate) and the cases investigated aren’t all that exciting (until the very end), but the fine cast keeps interest. The 1968 movie has an inflated reputation, mostly from critics wanting to wax sanguine over director Don Siegel, but rewatching it lately showed up its meandering script, a visual look like a TV movie, and a laughably dated, overwrought music score from Don Costa that plasters every scene it can get its blaring nose into.

Widmark and Guardino make a good team, and Ihnat pulls out the crazy stops as the killer; the climactic shootout (over-plotted story has almost no action) is explosive and surprising: best thing in the film. Siegel had to fight interference from producer Frank Rosenberg throughout, but his actors were impressed by his handling. I recall liking it a lot when I first saw it decades ago, and thinking it was barely tolerable viewed recently: I’m in the minority.  It joins sweaty hands with Frank Sinatra’s The Detective and Tony Rome and Clint Eastwood’s Coogan’s Bluff (also from director Siegel, that same year); all notable to a degree as links between eras in the crime genre, laying powder for the fuse set for that type of shootout to replace the ailing western, but without the flash spark that came shortly thereafter with Dirty Harry and The French Connection. 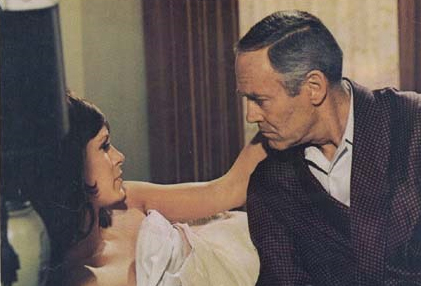