COLOMBIANA  makes a kickass showcase for the physical fitness and screen presence of slim siren Zoe Saldana, and displays commensurate panache in the action direction from Robert Megaton (surely a fitting name for a cinema combat wrangler). It’s The Look that counts in this Highly Unlikely 2011 pulper, another body-count nihilism exercise, because the script’s situations and dialogue don’t elevate the absurdity of the story.

As a child in Bogota, ‘Cateleya’ witnesses her family murdered by drug dealers. She escapes (in a dizzying sequence) and grows up into a super-trained contract killer (Saldana) who –what else?–Vows Revenge. It gets dished out in a series of slick, amusing if ridiculous payback scenes that lose acceptance-pressure at about the halfway point through the 108 minutes. 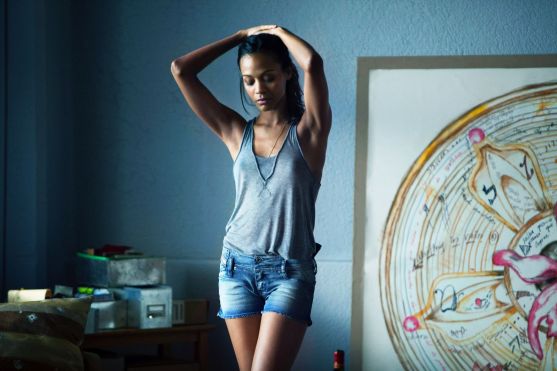 Cataleya ponders what the diablo it all means

Cinematography is aced (Romain Lacourbas), Zoe basically looks to kill for, and the girl-power theme pulled in $61,000,000 against a laydown of $35,000,000, with a sequel in the works.  Not strong on rational analysis, but who tunes into this stuff for smarts?  You watch to see sex-sizzler Saldana slaughter scumbags. Mission accomplished.

With Michael Vartan, Jordi Molla, Cliff Curtis, Lennie James and a bunch of guys who get wasted (via sharks, even) by our lean-muscled heroine.  Producer & co-writer Luc Besson has a securely established thing for hot chicks who can out-kick, out-shoot and out-last, since he preceded this vengeance vixen with Le Femme Nikita (Annie Parillaud), Leon (Natalie Portman), The Fifth Element (Milla Jovovich) and Bandidas (Salma Hayek & Penelope Cruz).  He followed this with Lucy (Scarlett Johansson).  He really needs to make at least one movie about a serene grandmother who hums ‘Greensleeves’ while feeding deer.