THE IMPOSSIBLE —-Naomi Watts is a fabulous actress, for my money one of the best alive. In the long history of Movie Screams, to which the lissome Aussie added her share in King Kong, it’s hard to come up with more heart-wrenchingly honest shrieks than those Naomi unleashes in this 2012 true-life tragedy survival drama.  Watts compresses the cataclysmic impact of the Christmas 2004 Indian Ocean tsunami, channeling the experience of countless thousands through the lens of one individual, mirroring the shock of the event into a few quick seconds of primal terror, sudden horror, emotional anguish and physical agony.

She plays a doctor, visiting a Thai beach on holiday with her husband and their three young boys. The characters are based on Maria Belon and her family, who were from Spain (working in Japan), but Spanish director J.O. Bayona and screenwriter Sergio G. Sanchez left the nationality non-specific, so those enacted by Watts and co-stars could present a universal take, since many stricken vacationers were there from a host of countries, and the regional victims came from a dozen nations.*

The badly injured mother (Watts) and elder son (Tom Holland) find each other in the debris-field after the waves, but the husband (Ewan McGregor) and the other boys are nowhere to be seen. To reveal any more about how the story plays out would be a cheat; suffice to say it’s filled with painful details, visual and emotional, superbly staged by the director, with top flight special effects (when the waves hit) and superlative art direction of the ghastly aftermath mess. 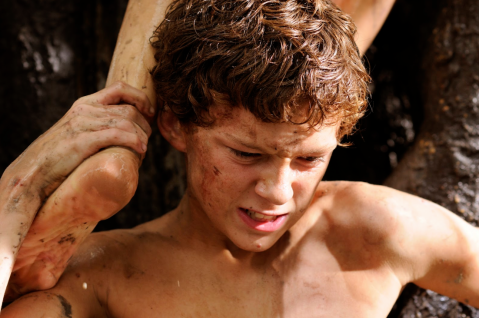 Holland and McGregor are excellent, and the supporting players include numerous survivors of the inundation. Much of the $45,000,000 production was filmed at the actual locations in Phang Nha, Thailand, near Phuket on the Andaman Sea side of the country, with the rest done in Spain (using a massive studio tank set): it was clearly an arduous physical shoot.

Beyond those soul-baring wails, Watt’s entire performance is flat marvelous, and she was Oscar nominated (honored as well in at least sixteen other film festival and awards recognition’s).  A critical success, taking in $180,300,000, the film runs 113 intense minutes.  With Samuel Joslin, Oaklee Pendergrast, Marte Etura, Sonke Mohring, Ploy Jindachote and Geraldine Chaplin.

*Rather than attempt a sprawling documentary-flavored epic covering all aspects of the event, with scores of characters in a slew of locales and acres of ultra-costly demolish effects, the director and writer honed in on one place and family.  Naturally, the p.c. police, ever on the watch to remind us all How To Think And React At All Times, felt compelled to chasten  the film for slighting the massive Asian death toll in favor of the European visitors, and by having Anglicized the characters of Maria Belon and her family.  Funny, since she was an adviser on the production and was credited with the Story.  That’s right, Art Sensitivity Commissars, make sure to cluck cluck the audience and ring that guilt bell! 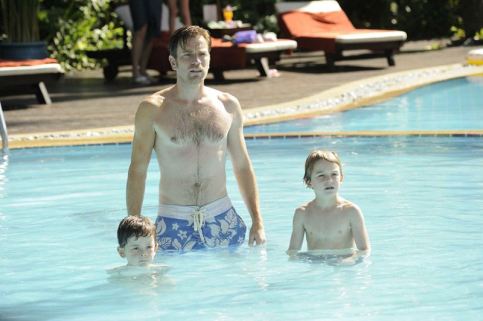 Batting aside the smug political hand-wringing of the terminally officious: as to this viewer, I somehow managed to accept and forgive Watts and McGregor for their skin tones and was not only impressed with the cast and the recreated details, but was struck anew by sorrow I personally feel. That comes from being one of those lucky enough to have visited a number of the idyllic locales affected, before they  were destroyed by the wave–in Thailand and Indonesia, and having treasured memories of all I met, no matter where they came from or what they looked like.  I’m content to mourn the 228,000 who perished, and applaud this artful capture of a sliver of that wound, rather than offer cause-grandstand bleats about how it should have been handled.  Dear Conscience Commandos: the more you wag self-righteous fingers in my face, the more I feel  like flipping one of mine at yours. And bravo to Naomi!