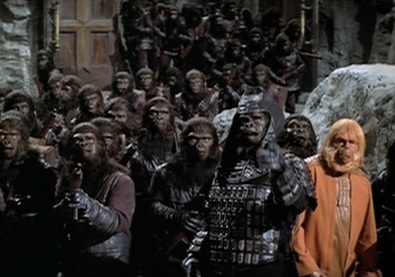 BENEATH THE PLANET OF THE APES—dumb but fun 1970 sequel to Planet Of The Apes  has astronaut James Franciscus looking for the first expedition led by Charlton Heston. He finds not only a forlorn Chuck, foxy Linda Harrison and angry apes, but mutant, telepathic humans living in the blasted remnants of New York City.

Franciscus (in the lead) and Heston (supporting this time) make decent sci-fi heroes. Hearing the inimitable crusty rasp of James Gregory come from the mouth of a gorilla is suitably amusing.

The makeup is even better than that created for the first hit, and there are quite a few hulking simians on hand. The mutant leftovers of mankind’s atomic past, however, are pretty dull threats, similar to what you’d see on an Irwin Allen TV show. Miss Harrison is garbed in a tattered animal-skin & fur bikini, like all hoped-for post-Armageddon knockout-mute-babes-who-ride-horses would have in their treehouse.

Costing $2,500,000, the 95 minutes were directed by Ted Post, making monkeys out of Maurice Evans, Kim Hunter, Paul Richards, Don Pedro Colley, Natalie Trundy, Jeff Corey, Victor Buono, Thomas Gomez and Gregory Sierra. It was the 14th biggest performer of the year, peeling green bananas for Fox to the tune of $26,100,000. Heston pulled an interesting deal for his reprise: he asked that his character be killed off (!) and he donated his salary to charity. Well done,’Taylor’.

The wipeout ending is jarringly nihilistic. “In one of the countless billions of galaxies in the universe lies a medium-sized star. And one of its satellites, a green and insignificant planet, is now dead.” 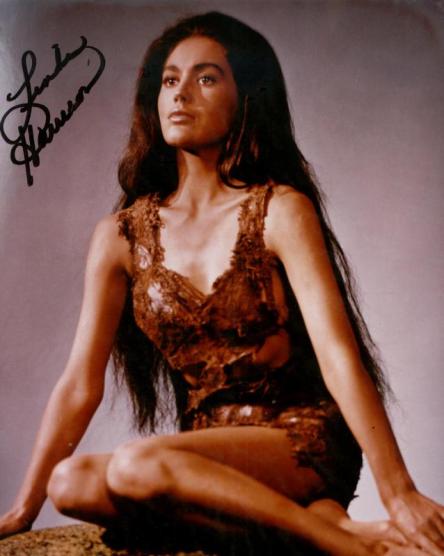