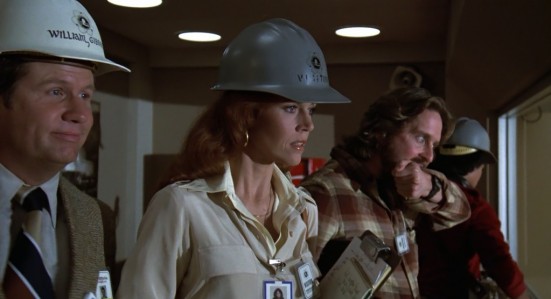 THE CHINA SYNDROME—-a good, if somewhat overrated 1979 drama about a TV newswoman and her cameramen, present at a nuclear plant when some sort of accident occurs. With the help of the plants engineer they begin to unravel a high-level cover-up, plotted by your basic conservative power mongers. 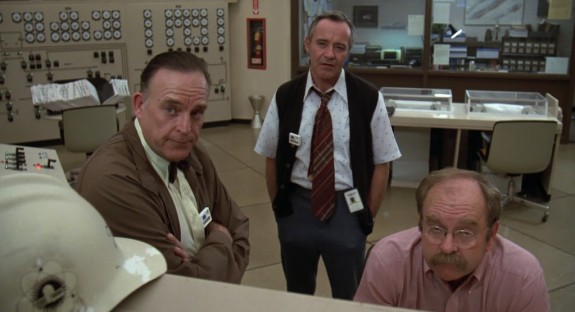 Timely concerns here, to this day (and–face it, forever ); inherently tense stuff, but the package is given such unrelieved starkness in treatment that it verges on overkill. The tone of everything is so darn heavy that it slows the pace down: ten or fifteen minutes worth of cutting (it’s 122 minutes), and some polish on the periphery would have made this an even more effective message flick. The photography contributes little to the tension level, and apart from Stephen Bishop squawking a title tune at you, a music score is nowhere to be found: Lalo Schifrin or Jerry Goldsmith would have honed the seriousness of it all to a sharper edge. The producer and director nixed a soundtrack, but I think they goofed. 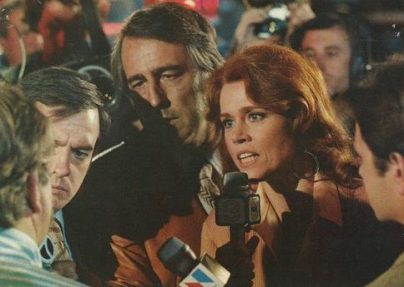 The supporting players were carefully chosen for the corporate look and they all fit. James Hampton rates the highest nod among the lot. Third-billed Michael Douglas is fine (he also produced), though his character is almost devoid of appeal.

The picture pretty much belongs to Jane Fonda and Jack Lemmon: both shine with sincerity, and their characterizations are most human and involving. The were each nominated in the Best Acting categories, and the Screenplay and Art Direction were also up for statues. 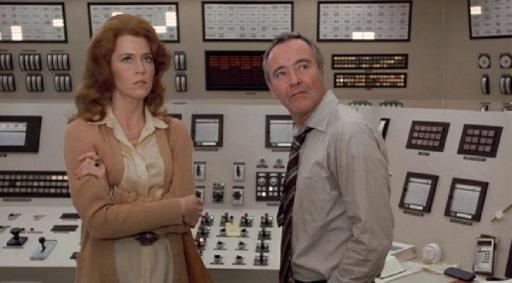 Fate tossed her mane when the film opened just 12 days before the Three Mile Island accident, the irony and fright no doubt helping the film’s $5,900,000 expenditure to be vaporized by returns of $52,000,000.

Directed by James Bridges, co-starring Scott Brady, Peter Donat, Wilford Brimley, Richard Herd, Daniel Valdez, Stan Bohrman, James Karen.  The nuke plants will be the end of us all, if it’s not already underway over in Fukushima… 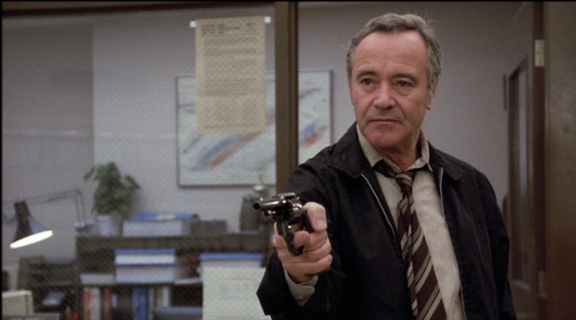