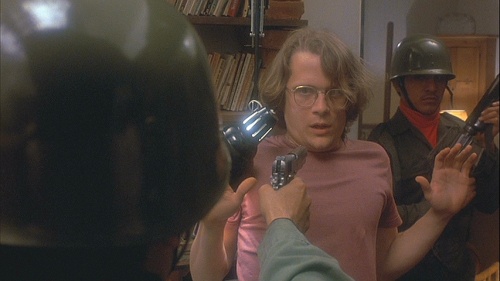 MISSING—-relentless, frightening 1982 drama, on a subject that unfortunately seems bound to remain contemporary as long as one US government after another pokes a bloody snout into other countries politics.  Set in Chile, in the chaotic, randomly brutal days following the 1973 coup that upset the elected and popular government of Salvador Allende, it’s based on an actual case, where a young American vanished into the catacombs of dictatorship, prompting a desperate search by his father and his wife through dual government bureaucracies.

Director and co-scenarist Costa-Gavras doesn’t pull any punches, dragging you along in heartrending fascination, damning the CIA covert ops at least as much as the sadistic snakes who ran things in Santiago.

Vangelis provides a fine musical complement to an atmosphere of palpable terror, superbly photographed and edited, with Mexico filling in for Chile as a location (who will fill in now?).

A strong cast, with numerous laudable bit parts, but it’s the two leads who dominate. Jack Lemmon has his best dramatic role since Days Of Wine And Roses, and Sissy Spacek is faultless, so perfectly natural that you’re never conscious of watching an actress, just a real person caught up in a nightmare situation. 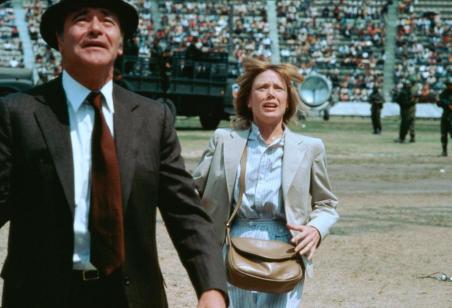 The screenplay (co-written by Donald Stewart) won an Oscar; the film was nominated for Best Picture, Actor (Lemmon) and Actress( Spacek). Costing $5,000,000, it returned $16,000,000.  Not 122 minutes you’ll want to revisit often, and you won’t let it go with anything like cheer, but it is a must-see for those who can afford time off from looking the other way. 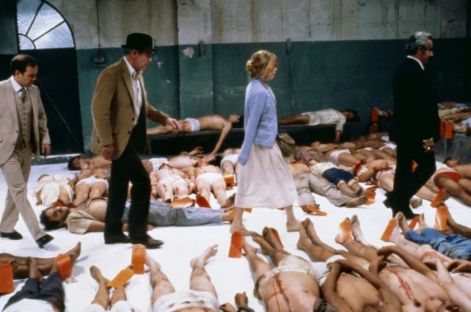 The government (ours) sued Gavras for having the audacity to put on film what so many of us have felt for years: the neo-fascist industrial-military cartels who run our fading democracy  sell us down the river at every opportunity, not merely by hoodwinking the citizenry and shaming our forefathers, but in paving the road to our own destruction on the gambol for big bucks.  Chile, Guatemala, El Salvador, Nicaragua, Venezuela, tick your pick. Open your eyes.