VOLUNTEERS—-a good time. Sly farce (well, not all of it is sly, some is just silly) takes us back to Thailand in a year many recall with wistful affection, before the national heart was broken and the psyche warped, 1962.

Pitching in for the Peace Corps are ‘Lawrence Bourne III’ (Tom Hanks), decadent Harvard snob, and ‘Tom Tuttle from Tacoma’ (John Candy), prototypical Yankee do-gooder.  You wouldn’t think this might be such a great idea for laughs, but with a deft combination of genre-mocking, and light nostalgia for lost innocence, the cast and crew pull it off rather well. 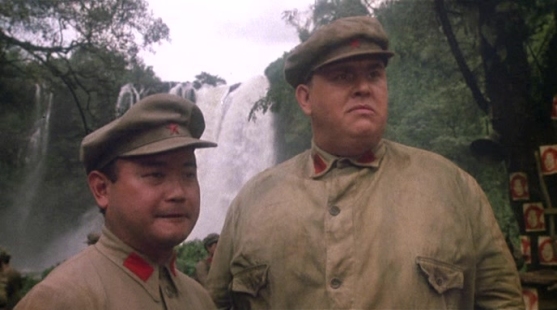 Hanks and Candy are dandy (sue me), as they were in Splash, a pleasant obligatory romantic angle comes from Rita Wilson (due to become Mrs. Hanks three years later), the CIA gets their nose tweaked in a tickling performance from Tim Thomerson (and ‘Mike’), and the supporting cast round out reliable stereotypes with brio.  Love that opening credits montage.

James Horner’s score is a neat heroic lampoon; Ric Waite mans the camera in deluxe fashion.  Director Nicholas Meyer again exercises flair in piloting offbeat material without leaning too far to one side or another—add this 1985 fest to his good work on Time After Time and Star Trek II: The Wrath Of Khan.