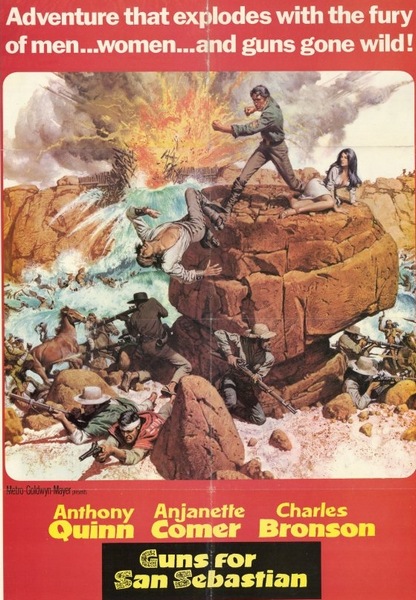 GUNS FOR SAN SEBASTIAN—-“The eyes of the Yaqui’s are upon us.”  Hard to improve on that morsel.  James R.Webb penned some good screenplays for some great westerns (The Big Country and How The West Was Won), but he sure turned in a wheeze for this 1968 opus, full of gaps in the narrative, inconsistencies in the characterizations and belly-laughs in the dialogue.

Set in Old Mexico of 1746, it deals with the legendary outlaw/folk hero Leon Alastray, played with typical gusto by Anthony Quinn. After fleeing from arrest, the lusty Alastray ends up impersonating a priest in a remote village. The locals are cowed by bandit leader Charles Bronson and his horde of Indian partners, the dreaded Yaqui’s.

Good color lensing from Armand Thirard and another exotic score from Ennio Morricone are pluses, helping to deal with director Henri Verneuil’s somewhat excessive running time of 111 minutes.  Main reason for action fanciers (count us) to watch is the large, energetically staged—if highly implausible—battle which ends the picture; Verneuil has all stops pulled for a big finish.

Otherwise, it’s a bit goofy. With Anjanette Comer, Sam Jaffe, Silvia Pinal, Jorge Martinez De Hoyos, Leon Askin and Jaime Fernandez (kid brother of famed & fearsome Emilio) *.  Made by a French and Italian crew, it’s the rare spaghetti-western set in Mexico that was actually filmed in Mexico instead of Spain.  Mostly ignored in the States, where it made around $2,600,000, it did better in Europe, where Bronson had garnered a big following.**

*Emilio does appear in the mob scene here, too, as do fellow victims from The Wild Bunch and ‘Agua Verde’, the estimable Jorge Russek, Chano Urueta, Aurora Clavel and Enrique Lucero. “Don’t be foolish and change his mood.”

** Charley was busy consolidating his following the same year by staying in the saddle for Villa Rides and Once Upon A Time In The West, whereas longtime veteran Quinn had been seeing his career position weaken through flop after flop—Marco The Magnificent, The 25th Hour, Lost Command, The Happening, The Shoes Of The Fisherman, The Magus, A Dream Of Kings, R.P.M., Flap….it takes a mighty strong ego—and the tenacity of ‘Zorba’ & ‘Auda’—to keep on plugging away after all those woofs. 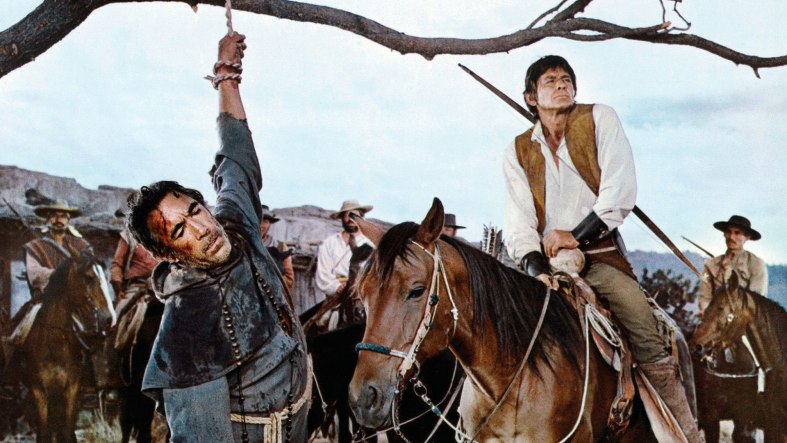