NIAGARA —“Get out the fire hose” says gobsmacked Casey Adams as Marilyn Monroe, poured into a crimson dress, slinks through a group of startled party-goers. He speaketh true. Young or old, gay or straight, if the sight doesn’t get your blood rushing downhill I frankly have to question your patriotism.

She also turns in a pretty good performance in the 1953 Technicolor-noir thriller, playing the two-timing tramp wife of a very unstable Joseph Cotten.  Her fateful machinations are observed by honeymooners Adams and Jean Peters.  Miss Peters is also easy on the eyes, and both ladies are surrounded by some of the most sublimely beautiful views of Niagara Falls ever filmed (thank the camera of Joseph MacDonald). This makes for a dandy travelogue along with being a well-written and thoughtfully adult meller. 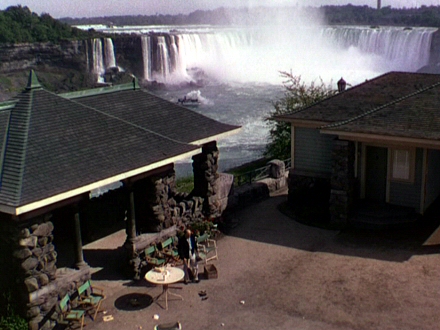 Cotten is effective in a rather risky type of role, an unlikable, depressed weakling who Monroe taunts, with scornful words and provocative poses. The ending is a corker.*

It’s a good movie, directed in a straightforward manner by Henry Hathaway, who had shown he could manage suspense as deftly as he could outdoor action, with solid credits like Kiss Of Death, The House On 92nd Street, Call Northside 777 and Fourteen Hours.  The movie could’ve gone from good to excellent but for a few blemishes. It’s a story that cries out for a moody score, ala Bernard Herrmann or Miklos Rozsa; the one provided by Fox journeyman Sol Kaplan adds little.

Casey Adams (who would later change back to his real name, Max Showalter) could tend to be overly earnest in dramas (he was better at comedy, later in his career) and his gosh-golly delivery here clangs a bit.  Plus, since the Cotten character is weak, and Adams so dorky, it tends to lopside the sexual tension.  A stronger second lead would have generated more heat, if indeed they could whick any away from La Monroe. 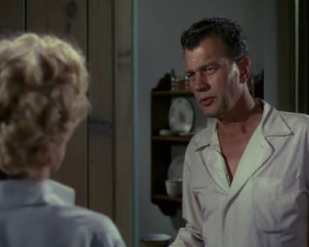