WATERLOO —one of history’s biggest and most terrible game-changing battles got a colossal movie airing in 1970, in one of the most expensive and logistics-challenging epics of any era. Filmed in the Soviet Union/Ukraine by Sergei Bondarchuk, the director of the definitive 1968 Russian version of War And Peace, it consumed $38,300,000 and employed over 18,000 Soviet soldiers and 3000 horses. 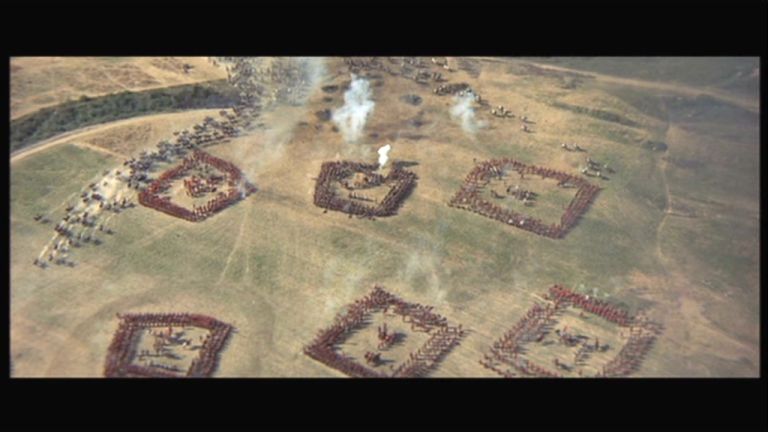 The scenes of spectacle in the second half should be enough to command a view from any self-respecting epic buff or history wonk, even if the first half is mostly jabbering confusion. Much of the jumpiness and muddle can be attributed to the trimming of several hours from the original rough cut to get to a running time of 132 minutes, so many characters are short-shrifted. What remains should satiate fanciers of giant battle scenes and stupefy those not interested in smoke-wreathed masses of colorful uniforms.

The first half covers Napoleon’s return from exile and his march on the armies of England and Prussia gathered in Belgium.  Hustle- bustle from both sides, with Orson Welles appearing briefly as the King of France. He’s so monstrously bloated you’d guess he was tethered to the sound stage.  Christopher Plummer plays the Duke of Wellington, and rather well, essaying the man as the intrinsically cold fish he was, though it doesn’t make for much cinematic excitement, even as foil for his opposites: Bonaparte and Rod Steiger. 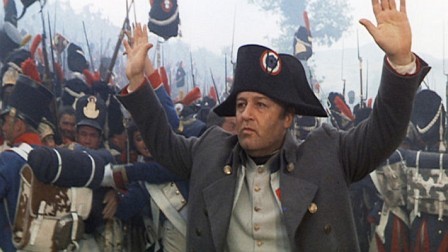 Steiger really has a field day with the tortured egomaniac who caused Europe so much grief *, and most reviewers trounced him mercilessly, feeling he over-acted to the point of absurdity.  Others may see it as brilliant. It’s a close-run thing from my throne: for all the emoting and grimacing, Rod doesn’t make a dent in the drama that swirls about him. 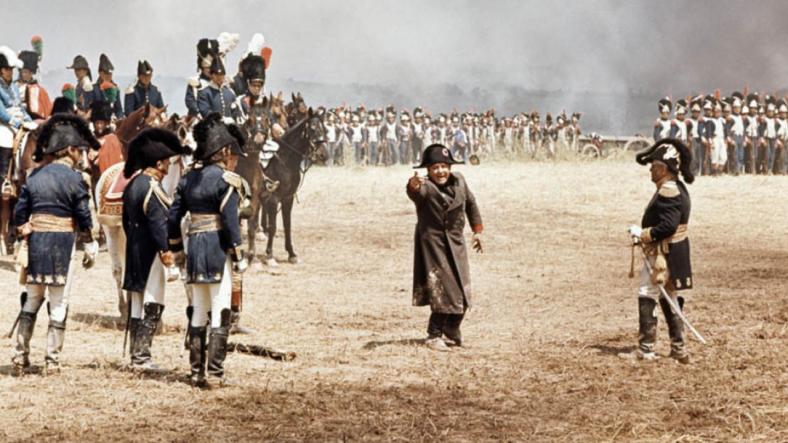 While most of the first part is pretty dull, at least the costuming and settings are lavish (thank producer Dino De Laurentiis), a ballroom sequence being particularly notable (director Bondarchuk had experience, having staged The All-Time, Never-Topped Ballroom Scene in War And Peace).

When at last the big showdown gets started, it’s quite the boggler. No stinting, as the camera pans on thousands upon thousands of men exchanging horrendous blasts of musketry, though detailing is sacrificed at the expense of the sweeping shots. There are some dazzling moments in the tumult, including some horse-falls that will have you stunned and upset—according to Mike Munn, in his book “The Stories Behind The Scenes of the Great Epic Films”, Colombia publicity folks told him that some four hundred horses were killed making the film on the Ukrainian locations, by the use of trip wires. By that time the practice was long outlawed in the States, but in eastern Europe animal rights were low on the priority, and this sad note mitigates enjoyment of the excitement. That 400 figure seems outlandish, but it is obvious that the equine casualties went beyond the pale. (Christopher Plummer, in his vastly amusing autobio, “In Spite Of Myself” mentions grievous animal suffering, but not on the scale of Munn’s assertion.)   On the human-end, Bondarchuk’s squadrons of assistant directors let things flop when it’s clear that a lot of the shooting done by the ranks of extras/ troops makes little spatial sense.

The title lived up to itself at the box-office: it was one of the greatest payday catastrophes ever logged, bringing in less than $4,100,000.

* History is primarily written by the winners, and it’s often overlooked that Napoleon was beloved by his troops and most of France and his republicanism (in the style of the day, for that misappropriated term) was a direct threat to the aristocratic heads of the rest of the continent. Their ‘God-anointed’ wealth and position were under direct challenge from a mere commoner.  Read, sort, balance, be glad you were not a young man in the Europe of the 1800s.  Fascinating page-turners from the historical-fiction realm are found in the ‘Sharpe’ novels of Bernard Cornwell, who has also offered his informed non-fiction tome to the mountain of books on the subject, entitled “Waterloo: The History Of Four Days, Three Armies And Three Battles”.  Recoil at the thought of a few miles square, in the space of one afternoon, carpeted with 46,000 dead and wounded men and thousands of dead and maimed animals.