DESTINATION TOKYO –popular 1943 mid-war Hollywood view of the submarine service, directed by Delmer Daves, written by Daves and Albert Maltz ( this patriotic mission didn’t keep him from the scourge of the blacklist).  It was nominated for an Oscar for Best Story (Steve Fisher).

Easy to see why it was a hit * back when (that go-get-’em title helping), but today it’s rather taxing, especially in view of the tighter, more realistic sub flix that followed.  The stereotypes in the crew aren’t as much fun as those in other same-year propaganda rousers Guadalcanal Diary and Air Force; just tired reheats of the familiar.

As the captain of the ‘Copperfin’, Cary Grant comes off best in a low-key, assured portrayal of the skipper as father-figure. John Garfield, Alan Hale and Dane Clark are wearying.

It’s a long (135 minutes) journey these boys make before they can sneak into Tokyo Bay and send a ‘Nip’ carrier to the bottom (cue audience cheers): about 25 minutes worth of trimming would have helped.  It did inspire a fan of Grant’s, a young turk from the Bronx named Bernard Schwartz, to join the submarine service. He eventually made it to Tokyo Bay and witnessed the Japanese surrender.  A few years later he’d sail into uncharted Hollywood waters and change his name to Tony Curtis. In 1959 Curtis would co-star with Grant in a popular sub-set comedy, Operation Petticoat. 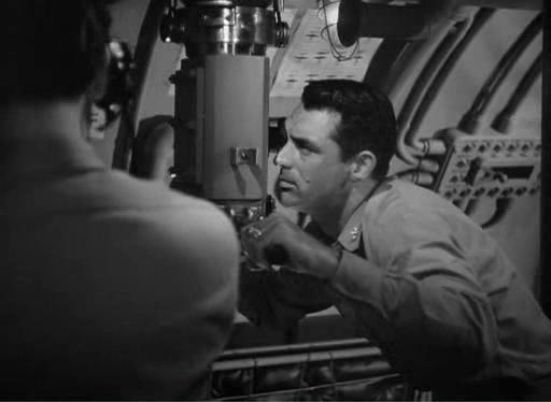