ROAD TO UTOPIA features typically inane doings from the durable duo Bing Crosby & Bob Hope. Here, they’re vaudevillians, hightailing to Alaska in search of a gold mine. As usual, Dorothy Lamour has the goods.

The jokes fly fast and furious, but it’s a long way from 1946 and many of them miss their bite today.  Actually it was filmed in 1943-44, but release was delayed so as not to interfere with Crosby’s Academy Award chances for Going My Way. Still, dated or not, enough of the material and its game playing summon up grins. 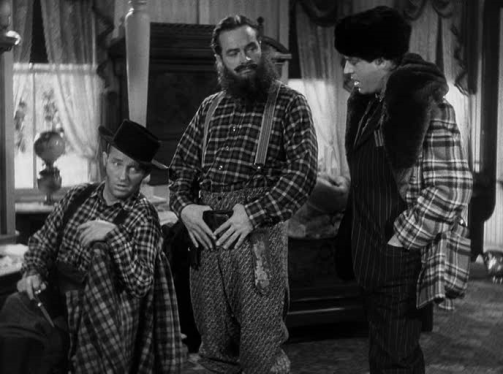 Famed humorist Robert Benchley provides narration for added foolishness. The script, courtesy of Norman Panama & Melvin Frank, was Oscar nominated. Critics liked it, and public ate it up, making it the 9th biggest hit of the year, with a take of $9,900,000, the second highest score of the ‘Road’ series after Road To Morocco.

Disaster was averted during the shoot when a supposedly tame bear starting growling at Hope. Despite entreaties from its handler, the actors refused to work with the animal. The day after, it mauled its trainer.

Directed by Hal Walker, at 90 minutes, with work in the cast for Douglas Dumbrille, Hillary Brooke, Jack La Rue, Robert Barrat, Nestor Paiva and Will Wright.