PRINCE VALIANT  will mightily please those who enjoy a good howl over terrible acting. Dare not miss the Arthurian gold mine in this medieval clanker; as the title hero Robert Wagner must be seen to be disbelieved. He could give John Wayne in The Conqueror or Stephen Boyd in The Oscar a run for the pub.

Yeah, I cut it myself. Why?

More laffs are piled on by Sterling Hayden, Victor McLaglen (wait until you see his hair) and Neville Brand, wearing some of the most absurd headgear this side of Carnival. Only James Mason, as the villain, seems to see thru the comic-stripped idiocy and he plays it up with cultured tongue-in-cheek, making the most of his goofy dialogue. 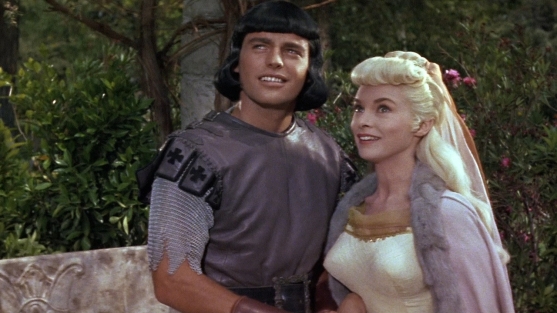 Methinks they did not have such Atomic bras in Yore days

On hand for the feast are Janet Leigh,Debra Paget, Donald Crisp, Brian Aherne, Tom Conway, Barry Jones, Hal Baylor, Primo Carnera and John Dierkes. It made some money back in 1954, but not enough to cover its $2,970,000 gamble that a comic strip so convoluted a chemist couldn’t follow it and so devoid of action that it’s amazing kids ever read it, could be transcribed into something a cast and crew could be proud of. It did get a paycheck for an English gal who doubled for Janet Leigh, 27-year old beauty Shirley Eaton.