THE SILVER CHALICE —wow, talk about In A Class By Itself. There are bad movies that you regret wasting time on and don’t wish to see again, enough of them to fill a stadium with DVDs.  Then (cue angel choir) there are those that leave you mouth agape between guffaws, conked with a realization that “I must possess this art for mine own”, thusly to seize a copy for relish with like-twisted loved ones. There are detailed, very amusing write-ups on this classic 1954 opus to be found over at the sites for DVD Savant/DVD Talk, by respectively, Glenn Erickson (we genuflect) and Stuart Galbraith IV—and I don’t pretend I can touch them, so I direct the faithful to those screen sages forthwith. 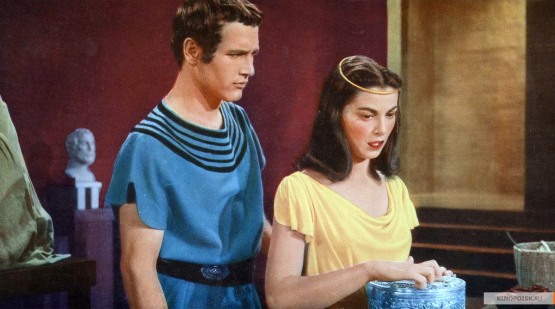 Hear me out, though, even if in truncated (in truncation? truncatory?) backhand praise, as I tell you this movie is to die for.  Famously, Paul Newman, who was ‘introduced’ here, took out ads, when the movie was aired on TV a dozen years after it stunned sensibilities in theaters, urging people not watch it. Newman of course surmounted his debut disgrace by enjoying a prosperous career, as did other notables in the cast: Jack Palance, Lorne Greene, E.G. Marshall and Natalie Wood.

They tried here, of course, being pros. The whole team tried, especially in visual stylizing, to create a different sort of Biblical drama. They just went 100% in the wrong direction is all.

Paul plays a Greek silversmith, charged with adorning and casting in silver a cup Jesus supposedly drank from (that maybe spilled something on The Robe he supposedly wore). Meanwhile, a fake magician (Palance) falls (literally) for his own publicity and the credulous/outraged citizens of Jerusalem and Rome wave their arms and make crowd noises. 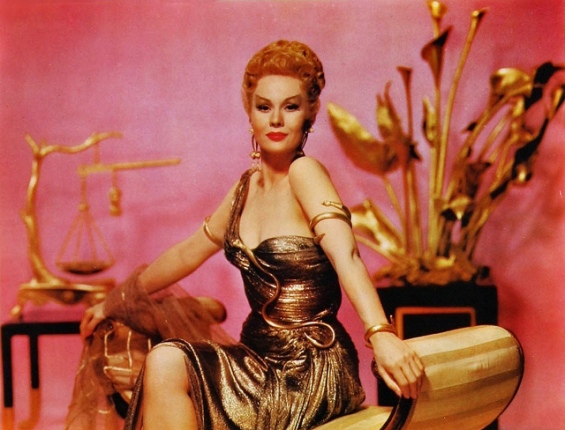 Scripted by a fellow named Lesser (no kidding) Samuels, from a novel by the busy Thomas B. Costain, the 135 minute, $4,500,000 goggler was  produced & directed by Victor Savile, who misses no chance to make things worse than they already are.

Beyond the high-camp hysterics of Virginia Mayo, Joseph Wiseman and the unforgettably unbalanced Mr.Palance, what sends the flick into NeverEverland is the production design   dreamed up by stage import Rolfe Gerard, art directed by Boris Leven with geometric wackydoodle out of Bosch-on-mushrooms mixed with Broadway on a bender. “You will be amazed.”

What have I wrought?

Newman is stiff as a board. It did get two Oscar noms, for Franz Waxman’s okay score and William Skall’s color camera work. Made money ($7,000,000 ) but not enough to cover costs or wipe off the egg-upon-face. Goofy costumes in abundance, foolish dancing, terribly staged action, howler dialogue—it’s Unmissable.  Delight in whatever-the-hell-it-is worn as a cape & tights by Palance, be captivated by the blue dancing girls hopping about to hopefully please Nero (good luck). Words become useless. Time stops.

With Pier Angeli, Walter Hampden, Alexander Scourby, Robert Middleton, Herbert Rudley, Michael Pate, Albert Dekker.  If you haven’t already choked on one from giggling at Virginia or Jack, throw an M&M at the screen and you may hit, in the throng somewhere, those redoubtable strivers Woody Strode and Strother Martin.

We’ll close with the admonition of Saint Peter, according to Lesser Samuels, as embodied in visage and voice by Lorne Greene : “It will be restored, but for years and for hundreds of years, it will lie in darkness; where, I know not. When it is brought out into the light again there will be great cities, and mighty bridges and towers higher than the tower of Babel. It will be a world of evil and long bitter wars. In such a world as that the little cup will look very lonely. But it may be in that age when man holds lightning in his hands, and rides the sky as Simon the Magician strove to do it will be needed more than it is needed now.”