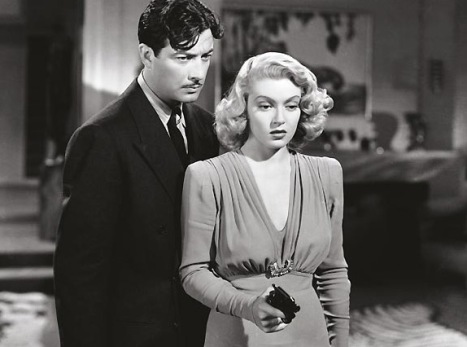 JOHNNY EAGER  drives a hack (taxicab, to those under 80). He uses that as a front for his crooked gambling operation (dog racing, etc.) while being generally pushy and insensitive to other hoods, assorted dames and his souse best pal.  Johnny Eager—which, to start with, is a pretty cool name among all the other Johnny-named characters in movie lore—made a critical and box-office haul back in 1942, when audiences stunned by December 7th ducked into theaters to see Robert Taylor at his trim-mustached handsomest and bombshell-of-the-moment Lana Turner trade quips, lock lips and duck lead.

“You couldn’t stop being a thief any more than a weasel could stop sucking chicken blood.”

Taylor (31 here) made fifteen films in the 40s: along with Waterloo Bridge and Bataan, this tough cookie is his best work from that decade. Turner–christened by apparently aunt-happy parents  Julia Jean Mildred Frances Turner— oozed a blatant sex appeal, and the 20-year old va-va-voom blonde was getting the big MGM roll-out, with this slick saga following hot on the heels of  Honky Tonk and Dr.Jekyll And Mr.Hyde.  Safe to say, Lana and Bob smoulder  (they did off-set as well). Yes, the publicity department pitched hay, blurting “TNT–Taylor n’ Turner–Together They’re Terrific.” 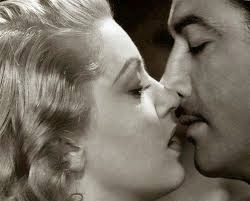 While the story may provide for tragedy (with a little moral uplift to sweeten it, thanks to The Code), it made for manna regarding co-star Van Heflin, who copped an Oscar as Best Supporting Actor, playing Taylor/Eager’s boozer buddy, dispensing many of the movies quips as an ironic counsel to Johnny’s AWOL conscience, quoting Shakespeare and dollops of self-loathing.  The sad-faced 31-year old had been acting for 13 years, in films for six, and this role boosted him into a strong niche as an offbeat ‘character lead’ where he’d dependably put across sincerity or harshness for another 30 years.*

Another sturdy character man, Edward Arnold, has a role here, as a good guy this time. Directed with a foot on the pedal by Mervyn LeRoy (this movie has Johnny entering a room, walking fast, so often, it’s almost a workout), and written with sardonic spark by the prodigious John Lee Mahin and brash rising star James Edward Grant, it also looks swell as shot by Harold Rosson, giving an MGM sheen to a genre usually reserved for the gangster gang over at Warners.  Costing $651,000, it brought in $2,586,000, making L.B. Mayer a happier papa.

Pushing a bit at 107 minutes, with Robert Sterling, Glenda Farrell, Barry Nelson, Charles Dingle, Paul Stewart. “You keep me around because even Johnny Eager has to have one friend.”

*HEFLIN:”Louis B. Mayer once looked at me and said “You’ll never get the girl at the end”. So I worked on my acting.”