CALL ME BWANA  flopped into #49 for the moneymakers of 1963, and with star Bob Hope’s other release that year, Critics Choice, crawling in twenty spots lower, it locked in Hope’s already downward trajectory on the big screen, with fans and critics deserting him as a movie draw in favor of his TV specials (Vietnam was good for somebody). 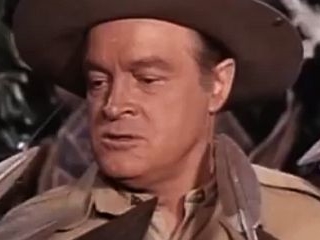 It’s not awful—there are a number of dumb gags that work scattered around those that don’t—but mainly it’s tired, and so poorly slapped together in continuity (the writers made it up, day-to-day, as it was shot) and production corner-cutting that it’s just a series of sketches stitched together to fill up 93 minutes.

Directed by Gordon Douglas, with a crew composed of Eon Productions people who had just finished Dr.No.*   Phony ‘African Authority’ Bob is enlisted by the Pentagon to locate a moon capsule that landed in Africa. Get it before the Russians (Anita Ekberg, Lionel Jeffries) do. Some Kennedy-Khrushchev topical jokes are in the mix along with expected leering double entendres about Ekberg’s architecture.