REFLECTIONS IN A GOLDEN EYE  tanked badly when it came out in 1967, sloughed off by critics as indulgence from director John Huston and another pounded nail in the reputations of stars Marlon Brando and Elizabeth Taylor.  Audiences either hooted or were just turned off.  Lately, it’s been re-appraised and raised notches, such is the ebb & flow of popular perception.  It’s interesting enough to not unfairly dismiss, with its brave-for-the-time tackling of adult themes (repressed homosexuality, voyeurism, adultery, self-mutilation, murder: everything but bad table manners), while now, five let-it-hangout decades down the spout, it has followings in both the Camp camp and the Hushed hut, where vent anointed gushes of ‘brilliance’ for some of Marlon’s choices.  Make up your own mind about the cold cream scene.

Army base, down South, early 50s (? hairstyles out of whack). A pensive (putting it mildly) Major (Brando) is taunted by his sexually ignored wife (Liz, in full bitch mode) while trying to stifle yearnings for an enlisted man (Robert Forster, 26, getting a big break in his debut) who among other things, rides horseback naked through the woods.  Conventionally troubled fellow officer Brian Keith has a thing for Liz, while wife Julie Harris stews.  Liz’s flamboyantly gay Filipino houseboy (Zorro David) flits back & forth.

Brando got on Taylor’s nerves by mumbling so much the others couldn’t make out what the hell he was saying and by playing typical Marlon-mind-f*** in purposely blowing take after take. Some appreciate his torment here (yes, he gets beaten-abused once again, this time with a riding crop–I calculate this as Brando’s 5th on-screen visit to the woodshed), others see it as just more over-the-top–itude.  Of the various southern accents Brando employed—Sayonara, The Chase, The Appaloosa—this is the slurriest.

It’s certainly a thoroughly unhappy movie, from one end to the other, and the mood is worsened by an artsy, ill-advised choice Huston made with with the cinematography by having it tinted amber: it just calls attention to itself and the hazy yellow has a tiring effect (did on me) that further weighs down 108 minutes of nonstop anguish. 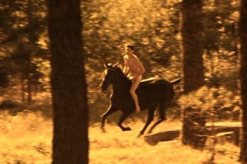 Keith received the best notices: he’s very good. Brando had five more years and four more failures before redemption via The Godfather.  Liz dropped dud after dud from here on out.  Costing $4,500,000, it returned $4,600,000, limping in at #67 for the year.  Look for Harvey Keitel in his first part (uncredited). From the 1941 book by Carson McCullers.  Like it or not (‘enjoy’ doesn’t serve) the moviemakers deserve credit for at least having the career-nerve and social maturity to tackle areas left out of the mainstream of the day.