RANCHO DELUXE , a neglected little scoop of modern Americana from 1975, offers another reason to consider the great Slim Pickens next time we debate whose face to put on a piece of our currency.  Dump Grover Cleveland (the $1000 bill) and slap Slim on there.

One perfectly-Pickens pronouncement from Thomas McGuane’s wry script could serve as caption under his hound-dog mug. It’s just a simple toss-off from that unique hoarse drawl Slim wielded, pure no-shit wisdom distilled like charcoal-aged bourbon. Looking over a felled steer, after remarking that it must’ve been hit by a bazooka to cause a hole “big enough you could throw a cat through”, Slim pries loose a slug from a .50 caliber buffalo rifle and adds, with an eyedrop of admiration and wonder, “Y’know, things is gettin’ down-right ro-mantic.”

He plays a ornery stock detective, hired by a Montana rancher to find out who is rustling his critters. The great Clifton James plays the exasperated rancher, with the always welcome Elizabeth Ashley his sultry wife. They suspect local layabouts Jeff Bridges and Sam Waterston.  Meantime, Slim’s posing-as-pure niece Charlene Dallas has unsharpened tools Harry Dean Stanton and Richard Bright in a horndog tizzy.

Critics at the time didn’t get with the movies leisurely pace, as directed by Frank Perry or it’s pot-wiffed tone, but they missed out, and it’s slowly evolved into found-gem territory, something its fans (the few who caught it before it drifted away) figured out from the get-go.  It’s “Aluminum Autumn” in the New West, with heartburn from past-due payments on pickup trucks replacing fret from gunslingers and tomahawks.

Everybody gets their licks in, including a choice chunk of silly from Bert Conway*, just-right music scoring from Jimmy Buffet and big-sky, fresh-air vistas from cameraman William A. Fraker. Stanton’s wistful comparing of sex-bomb Dallas** to ‘Bambi’ is priceless. Love that ‘Sharps vs. Cadillac’ scene.

It’s poky, sometimes feels simply aimless, has got loose ends, but that’s all part of the affectionately dopey charm. 93 minutes, with (a hot) Patti D’Arbanville and Joe Spinell. 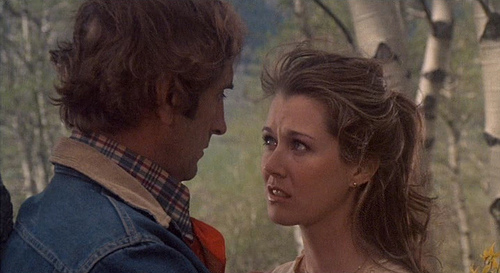