Henry Fonda is the steely order-bringer, calm and dead serious. Anthony Quinn is his adoring (hint), club-footed buddy, an equally lethal loose cannon .  Richard Widmark, one of the troublesome gang, has had enough with his mean buddies and signs on as deputy to the towns official sheriff, coming into conflict with the two outside hires. Old flame Dorothy Malone shows up, and local damsel Dolores Michaels vies for attention.

Overly plot-heavy, with a bit too much psychological anguish inserted into all the overlapping conflicts and desires. Directed by Edward Dmytryk, it’s not a happy movie, and the public coughed up only $3,300,000 to sort out its 122 downbeat minutes, not enough to match an outlay of $2,400,000.  Sturm und drang and nastiness featured heavily in the oaters that year, witness the bleak They Came To Cordura, The Hangman, Day Of The Outlaw, The Hanging Tree, Ride Lonesome and Last Train From Gun Hill—hardly a smile in the bunch. Thankfully, Duke & Dino rose to the occasion and their Rio Bravo outperformed and outlasted the lot.

Mainly it’s a downer, but the cast do their jobs well, and Quinn lights it up, swaggering out of the saloon, announcing “I’ll kill any man that moves!”, reminding you you’re watching a western and not a Freudian town hall. 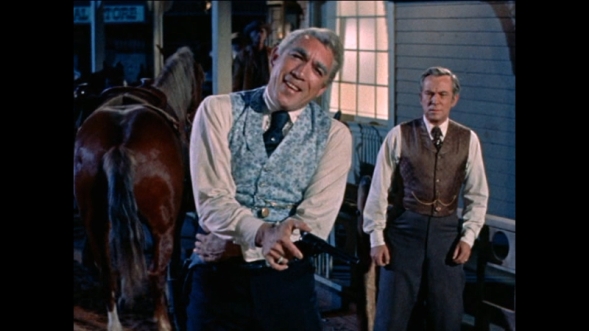