DINNER AT EIGHT  is one of those old Hollywood chestnuts that automatically receive a four-star pass from reviewers out of  what appears to be duty to its star-power pedigree.  Directed by George Cukor, the 1933 dramedy was a hit during the deep days of The Depression, taking in $2,156,000, hitting #7 for the year. There are a number of good lines scattered around and the cast members each get a big scene (or three) to play but I find its 113 talkathon minutes a bit wearing to get through, so I’m taking a pass on praise beyond noting its talent lineup. 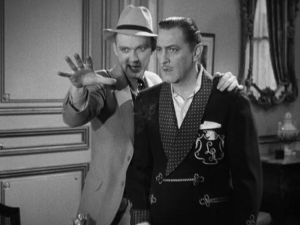 Assorted society has-beens and wanna be’s are invited to dine with a troubled shipping magnate and his ditzy wife. Business and relationship scheming, alcoholism, money woes, health issues, tact and the lack of. Put-upon maids.

Stars it’s got: John Barrymore (pretty much playing himself, points for guts), Marie Dressler (stagey grande dame mode), Wallace Beery ( either growling or bellowing), Jean Harlow (brassy into screechy), Lionel Barrymore (suffering), Billie Burke (shrieking), Lee Tracy (yapping). With Edmund Lowe, Jean Hersholt, Madge Evans, May Robson.  Beery & Harlow disliked each other, fueling their bickering scenes.  Fall spellbound if you must: for me it’s a case of I Guess You Had To Be There.