THE HUNTERS  revisits the unpopular Korean War from one of the few angles of unqualified victory that barrel-rolled out of those bleak three years of ‘police action’. Thanks in large part to Douglas MacArthur’s  egotistical blunders (shades of The Philippines six years earlier), the U.S. Army suffered some grievously expensive black eyes in terms of embarrassment, performance and casualties, while the Marine Corps valiantly did their best during a ghastly retreat at the Chosin Reservoir (see 1952s Retreat, Hell! ).  Stateside, demoralized Americans were shocked by revelations that numbers of our horribly abused POWs had succumbed to Chinese ‘brainwashing’.

One service that came out with, if not a smile, than a grim grin of ‘well done’ was the US Air Force, whose cocky jet jockeys made mincemeat of Soviet-supplied (sometimes piloted) MIGs in the skies over the Peninsula, at the ‘kill-ratio’ of roughly 15 to 1. *

This 1958 outing, directed by Dick Powell, does very well by its superior flying sequences, beautifully filmed by Charles G. Clarke (Captain From Castile, The Barbarian And The Geisha, 148 credits total in a 56-year career) and by the committed acting from its three leads, Robert Mitchum, Robert Wagner and Richard Egan. 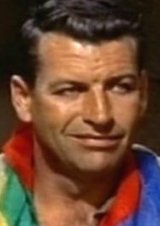 Mitchum was in his pay-attention mode, he’d worked with Powell the year before in the well-received submarine thriller The Enemy Below, and he comes off quietly professional.  Egan was in the middle of his up-ladder run, with hits A Summer Place and Pollyanna not far off . He’s easily acceptable as a commander, no doubt due in part to his WW2 service, where he made Captain, teaching judo & knife fighting (no wonder he looked good with a sword in The 300 Spartans )!

Wagner was never exactly a threat to Spencer Tracy (though he worked well with The Master in Broken Lance and The Mountain ) but before he slid into his smug, flat-toned, country-club-lounge-lizard mode starting in the mid 60s, he did some decent work in Between Heaven And Hell and A Kiss Before Dying, and here he is effective as a brash, jive-talking ace who has to get some sense batted into him from Bob.

Running 108 minutes, the $2,440,000 production came up $300,000 short in its receipts, reviews were tepid, and it’s pretty much forgotten today, but for those interested in late 50s star-gazing and historical aeronautical action, the lead trio and their supersonic steeds make for a watchable entry. With Victor Sen Yung and John Doucette.

* Hold horses here, hero hailers: along with decimating enemy air units, the grotesque total destruction visited upon the whole of North Korea was beyond the pale, something most Americans have never come to grips with. We destroyed every city, town,village, bridge, factory, dam in the country, killed millions of people (do you think they were all soldiers?), and left the survivors living in caves. Off you go, right-wing rally squad, into a sick red, white & blue yonder, mostly blood-red…