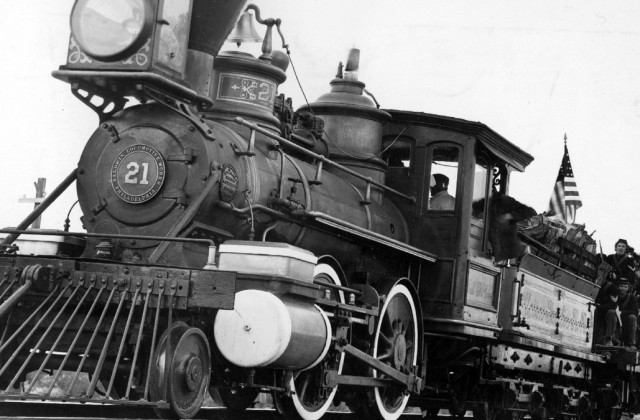 UNION PACIFIC——HEAD RAT: “Do you think you could handle ten thousand workmen? Keep them supplied with liquor and whatever amusements the Devil might buy? Keep them drunk and disorderly for month after month?”  BRIAN DONLEVY: “Go on.”

Cecil B. DeMille’s contribution to 1939 is typically big, long, dumb and fun, decorated by a couple of eye-boggling train wrecks. The ‘story’ of the building of the Transcontinental Railroad, and of the good & bad folk who built it is a ripe example of collaborative Hollywood bull, prime hamming and technical craftsmen muscle-flexing.

The script and director DeMille’s handling of it is choked with corny lines and ripe situations, cheerfully violent. The cast have a ball:  a calm Joel McCrea as trouble-shooter for the law & order lineup; a cute Barbara Stanwyck, enthusiastically bleeding blarney as a feisty Irish colleen; 21-year-old Robert Preston, arrogant and testy as a good heart in bad guy; Brian Donlevy, ever watchable as leader of the vermin—a group of casualties who include Anthony Quinn at his slickest.  Akim Tamiroff and Lynne Overman, as the heroes buddies, chew the scenery with gusto.

Stanwyck’s ‘Mollie Monahan’ opines to McCrea’s ‘Jeff Butler’ : MOLLIE (use your Irish accent): “Did you never know that flirting gets into a woman’s blood like fighting gets into a man’s? Now, a girl begins coquetting to discover if she has the power. Then she goes looking, like a fighter after a bully, for the hardest man to conquer. But ’tis never the man she wants, ’tis the pleasure of bringing him to her feet.”  JEFF: “Till the right man comes along and gives her the spanking she deserves.” MOLLIE: “Ah, that’s the man she dreams of.”

Eight writers had a hand in the wooly script, which has a goodly chunk of the railroad crews Irish. They were present in numbers, amounting to a tenth of the total involved, but it doesn’t bother to even mention the Chinese, who made up 2/3 of the 4,000 men who toiled in the great nation-binding saga. 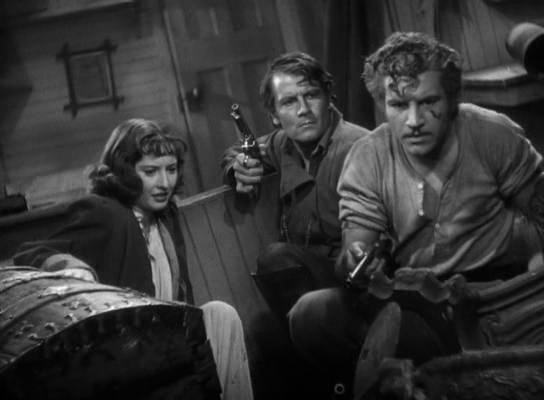 On the technical side, the Oscar-nominated Special Effects are neat, the costumes and set decoration plush. Some of the process photography is laughably hokey, and the fight with the Indians is cheesy. Lengthy at 135 minutes but fun all round, it grossed over $5,500,000, covering DeMilles’s layout of $1,451,000. *

“Now you boys has got your options of getting out in 30 seconds or being buried in 30 minutes.” 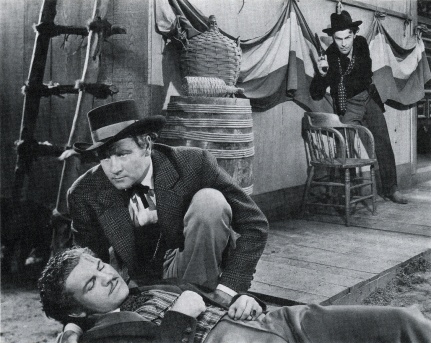 * DeMille, from his autobio, on Stanwyck: “…I have never worked with an actress who was more co-operative, less temperamental, and a better workman, to use my term of highest compliment, than Barbara Stanwyck….Barbara’s name is the first that comes to mind, as one whom a director can always count on to do her work with all her heart”.

While both Stanwyck and McCrea had kind words for their ringmaster-showman director, Preston, for one, didn’t think much of Demille, as a director or otherwise: “he was not a nice person, politically or in any other way. I think the only man DeMille ever envied was Hitler.”

1939 was a big year for Brian Donlevy. He was in six pictures, including classics Jesse James, Destry Rides Again and Beau Geste, which gave him an Oscar nomination for Best Supporting Actor.

I just hope that someday I’ll own a big ranch, with three fine sons and a hot daughter.