THE FAMILY JEWELS—-directed, produced and co-written by The World’s Greatest Ego–oh, I mean, Jerry Lewis, who ‘stars’ in this 1965 yecch. This time he plays seven parts. A little girl is going to inherit millions and she must pick her guardian from among her eccentric uncles.

Oh, great, now we get to see Jerr go ding-ding in all kinds of zany makeup. Seven Jerry Lewis’ are eight too many.

It came in at #38 for the years moneymakers here in the States, did well in France. For a real hoot, read the “Cahiers du Cinema” review. 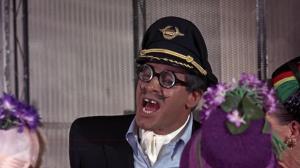