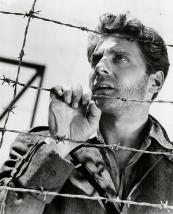 THE CROSS OF LORRAINE—-harsh, effective  WW2 propaganda flick, most watchable thanks to the top cast.  A number of Frenchmen find themselves in a German POW camp, undergoing your basic inhuman treatment.  At length, an escape is made, and they end up fighting for The Resistance.

Dashing and handsome Jean Pierre Aumont is the star, playing from the gut, as he had fought with the Free French in Tunisia, Italy and France, winning the Legion of Honor and the Croix de Guerre.  Gene Kelly does well in support, tortured by the insidious Peter Lorre, Nazi swine supreme, while Hume Cronyn begs for machine-gunning as a slimy collaborator.

Not the most believable array of plot developments crop up, but the message is the thing here (made in 1943)–and it’s loud and clear—wipe out the Nazis.  The movie concludes with a stops-pulled battle in the streets of a French village, as the populace attack the German garrison: corny and fanciful but thrilling.

Tay Garnett was the director of the 90-minute morale-booster, getting further good work from Cedric Hardwicke, Richard Whorf, Joseph Calleia, Wallace Ford, Donald Curtis and Jack Lambert. Costing $1,010,000, grossing $1,248,000, it was marked as a loser in terms of receipts. Vive la resistance!