THE LITTLE FOXES, aside from its powerhouse acting, fine direction and photography, and superb script, offers a fun look at the mannerisms impersonators used for Bette Davis, as she does some delightful flouncing and arm-waving.  The classic ‘Bette’ nails this fluttery business of hers in perfect sync with her character, steel cunning and biting ire beneath the affectations.

There’s superior work as well from four actors who recreate their roles from Lillian Hellman’s noted play (she wrote the screenplay for this 1941 tragedy off her stage work from 1939). On hand fleshing it out are Charles Dingle (vile), Carl Benton Reid (brutal), Dan Duryea (perfect weasel) and Patricia Collinge (marvelously pitiable).

Added for the film, directed by William Wyler, are newcomers Teresa Wright, 23, in her first film, and Richard Carlson, 29, with just a few credits under his belt.  Those two, the deeply sympathetic Collinge and the great Herbert Marshall provide a counterpoint of decency to the vicious plotting from Davis, her brothers Dingle and Reid, and nephew Duryea as they scheme to put together a cotton business (in the decayed Deep South of 1900), no matter who gets crushed in the way.

“The world’s open for people like you and me. There’s thousands of us all over the world. We’ll own the country some day.” 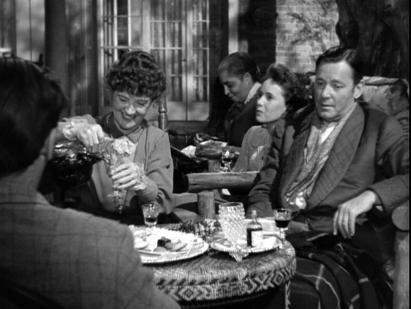 It takes about ten minutes of adjustment to the style of the period, and there are some ‘Negro’ stereotypes to endure, but the heartless conniving of that part of the human family that makes life harder for the rest of us rings true (timely as hell) in the form of these foxes. Nominated for Oscars for Best Picture, Director, Actress (Davis), Supporting Actress (Wright and Collinge), Screenplay, Film Editing, Music Score and Art Direction.  Wonderful photography is courtesy of Gregg Toland, who sandwiched this between Citizen Kane and Ball Of Fire that same year.

Dorothy Parker contributed to the script, which also features roles for Jessica Grayson and Russell Hicks.  116 minutes. Followed seven years later, in 1948, by the fine prequel, Another Part Of The Forest, with Fredric March.