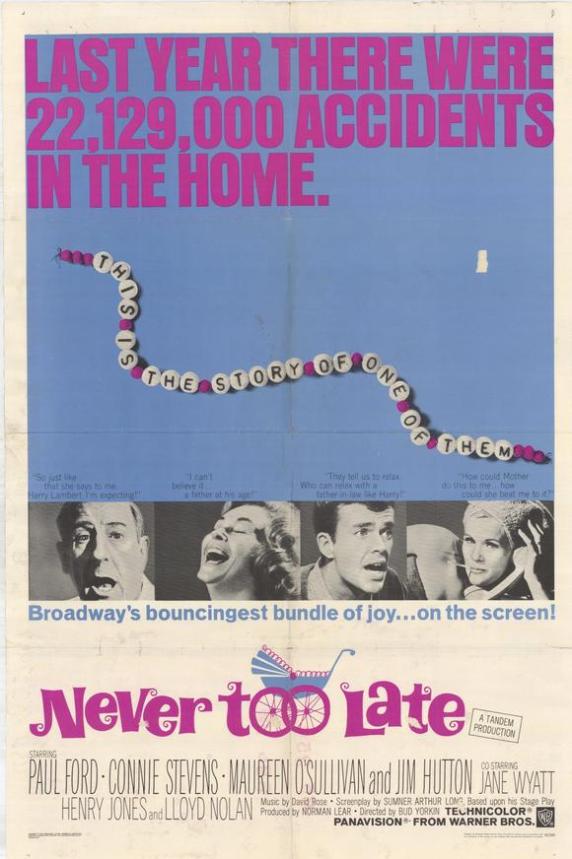 NEVER TOO LATE  is a 1965 comedy, taken by screenwriter Sumner Arthur Long from his play, which ran over two years on Broadway, with stars Paul Ford and Maureen O’Sullivan recreating their stage roles for the movie. Middle-aged Maureen finds that she’s out-of-the-blue pregnant, turning the domestic situation topsy-turvy.

Fogey hubby Ford is naturally flabbergasted and becomes the butt of many Old Dog wisecracks from his neighbors, while daughter Connie Stevens and son-in-law Jim Hutton frantically try to match the elders fetal feat. 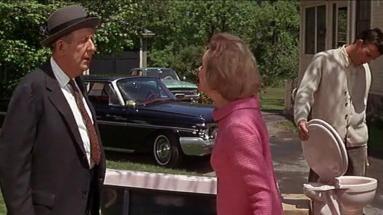 Broad, obvious, loud, it was once raucously funny, but time and changing mores have taken away almost all of the bite, making it seem prehistoric and pointless. Ford, with his great, mournful moon-face and helium-blast delivery is still enjoyable, but he can only keep your attention for so long before the windy antiquity of the rest of the project burns you out. Stevens proves pointedly why she never became a bigger star.

It was a busy year for Hutton, 31, also on view in big-scale productions The Halleluhah Trail and Major Dundee. His five-year old son Timothy made his debut here.

Directed by Bud Yorkin, lasting 105 minutes, with game help from pros Lloyd Nolan, Jane Wyatt and Henry Jones. It got to 52nd place for the year, grossing $5,700,000. 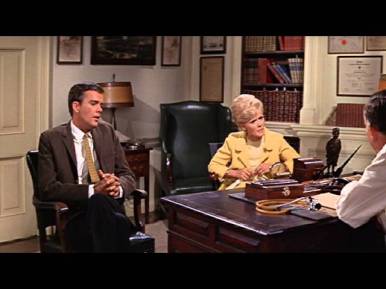